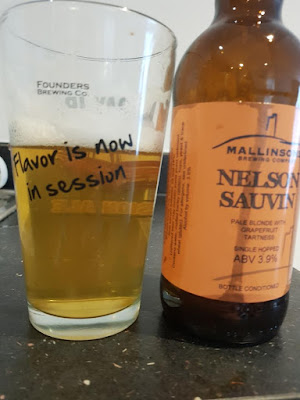 All good things must come to an end. That is the nature of existence. What that means in the real world is that you come to the end of the beer box. Which means the last of our forays into Yorkshire's finest: Mallinsons. Yes, it's the end of the line but what better way to go out than with (hopefully) a blast of Nelson Sauvin hops. It's the usual 500ml bottle-conditioned, single-hopped, pale ale tipping the scales at a mere 3.9%. It's got a best before date of January 2021. It poured golden with a large white head. The aroma was quite sharp with some acidic notes and a large burst of grapefruit and lemon. Taste was more balanced than you might have expected from the nose. Gooseberry and grapefruit are nicely underscored by a light malt backbone. The hops really do their job in the dry fruity finish that leaves you wanting another slug.
The final Mallinsons of this run didn't disappoint and serve chilled will delight the summer palate.
Post a comment
Read more 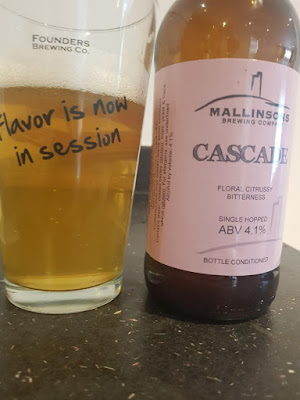 Now today we're going to do something totally different. Ha. Had you worried there, didn't I? Of course we're not. As we've established that we're on a roll, we're going to play on. Which means it must be Mallinsons time. Something of a classic today as Cascade is one of those ubiquitous hops that you can't really go wrong with. Or can you? So once again we have a single hopped, 500ml, bottle-conditioned pale ale that comes in at 4.1%. It poured pale gold with good carbonation and a large white, fluffy, head. On the nose there was some sweet citrus and some floral undertones. It was light on the palate with a gentle but refreshing mix of lemon and sweet citrus. The lemon comes into its own in the medium dry finish. Very easy to chug; so another tick for the Mallinsons crew.
Post a comment
Read more 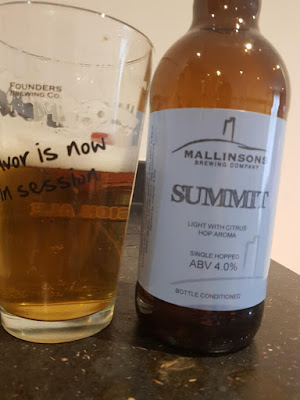 You've got to roll with it as those Gallagher brothers might say. And as I'm not one to break up a winning formula, it's back to the Mallinsons today. They have a reputation for being one of the-some might say THE-best purveyors of bottle-conditioned beers. But we're only one bottle in, so it's all still to play for.
This is a 500ml, 4% single hop, pale ale that is best before January 2021. It poured light gold with a decent white head and good carbonation. On the nose there was bread, some citrus and a little spice. It was medium bodied with a smooth mouthfeel and an initial gentle burst of tangerine. This develops with the addition of spice in the second wave. A well-rounded dry finish completes yet another winner from the Huddersfield hopmeisters.
Post a comment
Read more 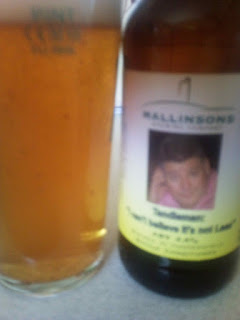 After the success of reviving the Kernel tasting sessions, we look back once again into the archives for inspiration. Apparently it's 10 years since I first visited Mallinsons brewery and 9 years since a Mallinsons was had for breakfast. And what was that beer? 10 points if you can remember that it was the legendary Tandleman: I can't believe it's not Lees. Ah those were the days. So, suitably inspired, it's Mallinsons time once more.

This is a 4.4%, 500ml, bottle-conditioned beer that is late hopped with Centennial. It has a best before date of February 2021. It poured with a nice golden hue and a large white head. The aroma was floral/herbal with some citrus and sweet malt. It was smooth on the palate with a well-balanced malt profile and gentle citrus tones. It had a surprisingly dry finish which made for a very pleasant drink.
2 comments
Read more 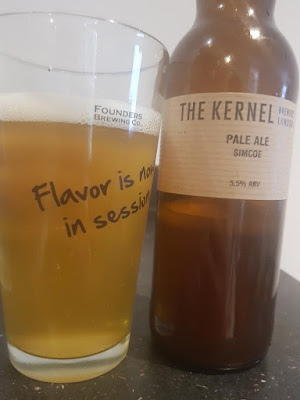 Once, twice, thrice a Kernel as the Commodores never said. Which should give you a clue as to today's choice of Weetabix accompaniment. Yes we're starting the week by rounding off the Kernel. However, now that they are back on the radar, no doubt we will return to them forthwith. If not sooner. So this is a 5.5% bottle-conditioned Simcoe infused Pale Ale. And hooray, it comes in a 500ml bottle. It was bottled on the 24.4.20 and should be drunk before the 24.8.20. It poured a hazy gold with decent carbonation and a good-sized white head. Aroma was more subdued than I expected and had more red berried notes than citrus. Taste was initially smooth with lots of apricot and juicy pineapple. This starts to gets progressively drier as the passion fruit and pine flavours kick in and the finish is quite intensely bitter.
Another Kernel that delivers on its promise and serves up a rather tasty slice of Simcoe hopped delight.
Post a comment
Read more 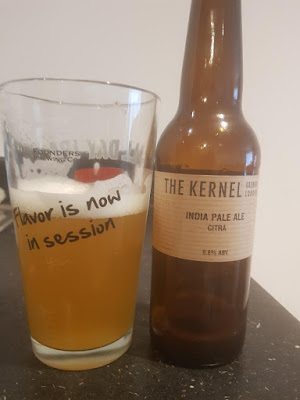 Well what do we have here? Yes, it's another Kernel. Having neglected them for far too long, it only seems right to redress the situation now. They are known, of course, for their hop combinations. But as we are on a roll with single hop beers, let's stick with that. This one involves the ever-popular Citra but can it stand out from the pack. So we have a 330ml, bottle-conditioned, 6.6% IPA. It was bottled on the 25.4.20 and should be drunk before the 25.8.20. It poured a hazy gold with a large off-white head that quickly evaporated. The nose was fairly subtle with obvious sweet citrus tones. Mouthfeel was quite smooth with just a little stickiness at the back. Plenty of pithy orange and grapefruit flavour that dries the mouth out but disappears relatively quickly.
Not as clean tasting as some but given the strength, it delivers on its object of giving you that Citra hit that hop addicts crave.
Post a comment
Read more 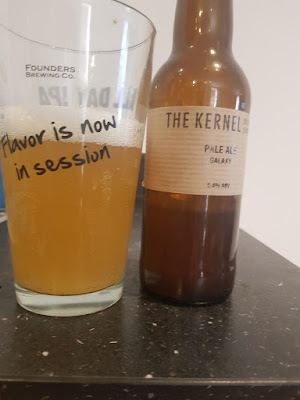 Remember Kernel? The little London brewery that did rather well and made something of a name for itself? Of course you do. Let's face it, if you're reading this, you're probably old enough to remember the Charleston. Anyway recently someone said to me: “Whatever happened to Kernel?” I told him how the hell would I know but it did get me thinking. Apparently it's been 5 years since I had one for breakfast, so here goes. So we have Kernel Pale Ale Galaxy weighing in at 5.4% and coming in the usual 330ml bottle. It was bottled on the 16.4.20 and needs drinking by the 16.8.20. One thing that hasn't changed is the simple labelling that quickly became iconic in the burgeoning craft beer scene. It could be sometimes hard to read in a dark bar, though. I'm not one for pushing for change just for changes sake, but I do think it looks a tad outdated now.
The beer itself poured a hazy yellow with a large off-white head. Carbonation was decent. The aroma was very upfront; …
Post a comment
Read more
More posts