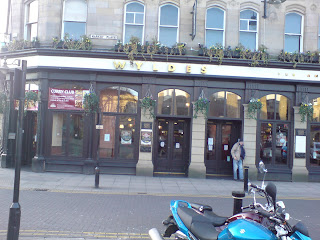 Wyldes is located at the heart of Bury town centre, right next to the Robert Peel. Originally a bank, it was converted into a pub several years ago by Joseph Holts of Manchester. New pub openings are rare (well round here anyway), so it was welcomed with open arms. Unfortunately, it's been rather hit and miss since then. Done in the mdorn Holts style, there's lot of exposed wood and a mix of seating styles. Very unusually for pubs these days, there is a bar upstairs (with cask on), but this seems to only be open sporadically. As is the curse of modern builds, the toilets are upstairs as well, meaning although your bladder is saying yes, your legs are saying no. On the beer front, Mild and Bitter are the staples, with the occasional seasonal offering making an appearnce. This being an "upmarket" Holts outlet, the prices are somewhat more expensive than many Holts drinkers are use to paying. However, Bitter is reduced between 2-8pm and on Mondays, it's only £1.49 a pint.

Overall beer quality is usually acceptable, if not remarkable. Purists do argue that the beer is generally served too cold, although I find Holts is better served that way. Anyway, you will get the odd warm pint out of the lines at quiet times. Bitter is a better bet than Mild, which is 50/50 to be off-there just aren't many drinking it. Today, though, both were fine. Seasonal beers are even more of a gamble, as Holts drinkers are notoriously reluctant to try them. Probably because most of them aren't very good! 1849 was on today, but in poor condition.

So maybe worth a visit during the week, ideally as a first drink, otherwise your palate will be compromised. At weekends, it's monkeys in suits on the door and best avoided.
Opinion Pubs

Trev said…
ive been a regular in wyldes for a few years now and ive never had a bad pint of ale in there. Since the new landlord started theres been some great guest ales on.. strangely for a holts pub to. the garlic vodka is foul but a pure novelty for the weekend crowd. one thing wyldes has over the peel... you can get served within five minutes, and your not surrounded by dole scum!
26 September 2010 at 10:51