November 22, 2008
Eddie, the eager, legal beagle, suggested we pop out for a drink. Apparently it was National Tweed Underpants Day, which is a sacred day on the IOM. Hence, whilst the Manx Minx was busy washing his Donegal tweed smalls, he was free to drink at will. I reluctantly agreed-I had planned to spend the day cataloguing my Dana record collection, but Eddie is very persuasive. But where to go? Obviously it had to be somewhere local and easy to get to. And that’s how we ended up in York.

Our primary goal was to visit Ye Olde Punch Bowl in Marton cum Grafton-the home of Neil Morrissey’s brewpub venture. The omens weren’t good, with cancelled trains and mad dashes from platform to platform. However, eventually we arrived in York. We’d missed our bus connection, so had 40 mins to kill before our next one. A pint was in order, so we headed straight for the Maltings. This small, one-roomed pub was already busy, even though it was barely noon. Rather annoyingly all the tables were marked reserved, leaving the drinkers stood around rather aimlessly-whatever happened to first come, first served? York Guzzler was a good start though, with plenty of flavour for a 3.6% beer. A sign over the bar proclaimed that “all beer can be served without a nozzle.” Really??? 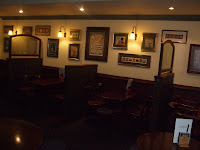 A yomp took us to Brigantes. This spacious cafe bar was new to me and I was quite impressed. The frontage allows plenty of light to seep into the front bar area and there are cosy booths in the back room. It’s the kind of bar Manchester could do with and makes the likes of Bar Fringe seem like the poor cousin. Most importantly the beer was good, with 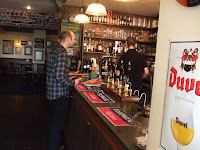 Leeds Pale going down very well. A quick check revealed an interesting menu as well. Haddock in Erdinger caught my eye, whilst Eddie was drawn to pan-fried guinea fowl. However, our bus awaited and so we paid our thanks and made our way back to the station. 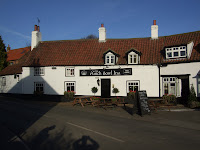 The 142 bus makes for an interesting journey, winding up and down country lanes, and through hamlets with names such as Great Ouseburn. Somewhat reminiscent of Lincolnshire, a lot of the landscape is flat, agricultural land. Ye Olde Punch Bowl is on a winding bend and struck us as being much smaller than it appears on TV. Sure enough, the rooms inside were compact with fires in two of them. There is a pleasant outdoor drinking area, and of course there’s the brewery. We poked our round the corner and were promptly invited in by the brewer. A quick chat revealed that they were currently mashing Best Bitter and their seasonal-Mulled Beer. Of course I wanted to ask lots of technical questions, but the best way to assess beer is to swill it, so we proceeded into the pub. 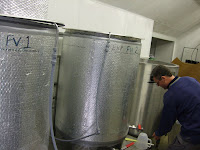 We were both impressed with the layout, with the bar area being modern-contemporary in style with plenty of light coming in. There were people sat at the bar, and we didn’t get the impression that it was a restaurant serving beer-as some of the grumpy locals on TV claimed. Definitely a modern pub I’d say. The food looked good and £8.95 for fish & chips, particularly in such a setting, shows what a liberty certain places in Manchester are taking. However, we weren’t there to eat but rather to try some of the four beers on offer. Ignoring Daleside, we went for their own brews. 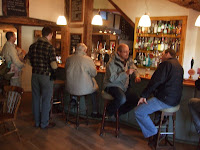 Firstly, the beer was cold. Very cold. Obviously stung by the 19C reading that that Cask Marque initially got, they’ve super chilled them. Definite chill haze on the Blonde, but when warmed up it was pleasantly fruity, with a smooth finish. They were shi

fting quite a bit of it, as all the ladies-who-lunch were on halves of it. The Best Bitter is their new beer and had more bitterness than the Blonde, although still very easy going. It’s supposed to be a Pilsner type, but seemed a variation of the Blonde to me. I also got a taster of the Mulled Beer (6.2%) which had a mince pie mouthfeel and would probably go down well with Sunday Roast. 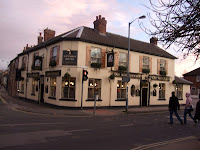 Back in York, there were a couple of new pubs we needed to check out, so we made a long (very cold) trek across the city. First stop was the Victoria on Heslington Road. This is a large pub straddling a road junction, and belongs to Old Mill Brewery. Now I can’t say I’m a fan of their beers, all being malty and sweet as far I’m concerned. However inside, the pub was well-appointed, albeit quiet. Bullion was tried and despite being their lightest beer, was er, malty and sickly sweet. A pity as the pub itself is very cosy.

Next up was the Waggon & Horses which reopened as a Batemans pub some 19 weeks ago. They’ve done a very good job, keeping a multi-roomed layout with wood-panelling and lighting that makes for a warm, intimate atmosphere. The landlord was very welcoming and there were eight wickets to choose 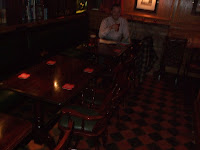 from. We played safe with Roosters and studied the limited, but very reasonably priced menu. Portions were wholesome and whilst I enjoyed my bangers and mash, Eddie tucked into his steak. Across the road is the Rook & Gaskill which always has a good selection and didn’t disappoint with a quenching Salamander Aztec.

Hopefully the brewers didn’t take things too literally as “Aztec hop” is slang for diarrhoea!

ssing and there was just time for one last drink. It had to be the historic Blue Bell. This claims to be the smallest pub in York and is certainly compact. Always busy, it’s much improved since the smoking ban. I had memories of standing in the drinking corridor with Tandleman, so for nostalgic reasons I plumped for Adnams. Something of a trek took us back to our train. You can tell that everyone knows there are no conductors on at night, as witnessed by the amount of alcopops being swigged en route. Being the considerate type of drinker, they also saw fit to leave their bottles everywhere-including in the toilet. Eddie was by now complaining about his bad knee-he'll say anything to try and get me to touch his knee-Tandleman is just the same.

Back in Manchester we headed for a drink at the Bank. This was unusually busy but one beer caught our eye-Morrissey Fox’s Blonde. I had been told this was the version brewed by Newmans, so was curious to taste the difference. This had more zest than the one brewed at the pub and the hops lingered longer. Possibly even better than the original? We marched up to the Angel which had Little Bollington on, before having a very late nightcap of Durham White Velvet in the Marble. Then it was home time. York and MCG both proved worthy of a visit and unlike Tandleman yesterday, prices were very reasonable.

Tandleman said…
Have the sussed out (or is that calculated) how many breweries actually brew this stuff in its various forms?
24 November 2008 at 11:05

Tyson said…
I was told Marstons, Cropton and Newmans. And of course there's the original! As i've had 3 versions I'm setting myself up as the North West's resident Morrissey Fox expert:)
24 November 2008 at 12:44

Tyson said…
It's a tangled web but if I understood it correctly, then Marstons are doing the bottled version now. The exclusive tie with Tesco will be ending shortly and as they're already shifting loads they need a big volume brewer. If that's the case then the bottle I had last week was Marstons, although I can't say I noticed much difference.
24 November 2008 at 13:12