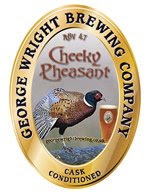 Eddie, the eager, legal beagle, was at a loose end. The Manx Minx was out collecting wild mushrooms under the light of a full moon. Well she claimed she was going for a curry, but we’ve all heard that before. Honestly, I ask you, which is the more likely? So abandoned and unwanted, his thoughts naturally turned to drink. I accompanied him merely to ensure that the statutory minimum number of drinkers, as required under EU legislation, was met.

Our first stop was the Trackside. A good mix on the board and the first pint-

George Wright Cheeky Pheasant (4.7) was pleasantly fruity and made for a good start. Unfortunately, our second choice proved disappointing. Facers Flintshire Bitter was only 3.7% and should have been light quaffing ale. Sadly it suffered from “Bazens Disease” i.e. it was very heavily smoked, making it very difficult to enjoy. I hope this malady isn’t spreading amongst the local microbrewery population; otherwise we’re all in trouble.

Moving on, we decided to take a punt on the Peel. Relying on their perverse nature, there was a chance that, with the JDW festival now officially finished, there would be festival beers available. And indeed there was. O’Hanlon’s Goldblade (4%) was a clear wheat beer with a good mix of citrus and floral flavours making it very easy drinking. Bath Golden Hare (4.4%) was even better. A light, zesty beer, the initial hint of diacetyl was blown away by the long, dry, bitter finish. I could have gladly stayed on that all night, but we were on tour.

Next stop was our ex local, the Good Samaritan in Ramsbottom. Now reopened under new (temporary?) management, I had heard conflicting stories about the place. Certainly most of its former customers seem to be boycotting it for one reason or another. Some claim it’s too expensive-£2.40 for Copper Dragon, others that the landlord is a “miserable bastard,” and others simply out of loyalty for the irreplaceable Roger. However, it was now going to face Tyson’s famous Tuesday night litmus test.

First impressions were favourable. The place was clean and the front parlour area now boasted tables which improved its appearance. Of concern to me though, was the return of the pool table to the backroom. Not only does it take up very valuable seating space, it historically has attracted the kind of clientele that Roger so successfully banished. Only time will tell if it’s going to slip into bad habits. Customers were thin on the ground, with a grumpy bus driver holding court at the bar, telling anyone who would listen that it’s a well-known fact that you can’t get insurance to drive along the Champs-Elysees. Three beers were on-Golden Pippin, Theakstons, and the redoubtable JW Lees-which has survived every incarnation of the pub. We tried the Golden Pippin and found it to be good, so good that we had to stay for several.

Our next port of call was to be the First Chop but it doesn’t open Tuesdays, so we marched on to the Major. What came as a surprise as we traversed the back streets of Ramsbottom was how busy it was for a Tuesday night. We discovered a very busy Thai restaurant and a trendy bar called (unimaginatively) The Lounge was also doing good business. It was quiz night at the Major, which probably explained the number of bums on seats. However, sensibly, this was only taking place in one room, so we sought sanctuary in the other room. There were signs advertising Cumbria beers, and indeed Hawkshead Lakeland Gold was available. When tried this proved to be in excellent condition, with good carbonation and an appealing fruity aroma. The body was rich with plenty of hops and a good bitter finish. Very tasty. Out of curiosity, the Golden Pippin was tried, and also found to be excellent-even better than at the Sam.

Heading towards Bury we called in at the usually reliable Towler. However, the Pippin here was pure vinegar and we even had the old adage “but Tom has been drinking it all night” put to us-how quaint! Tom, being the only customer in the place, must have had a stomach of iron as, even if you could ignore the pong and drink it, it would have passed through you quicker than Senna. Politely declining the option to switch to Greene King IPA, we took our money and walked down to the Sundial for a nightcap. It was quiz night here also, but alas there was no escape from it. Wainwrights was on offer, the only problem being that it was very warm. Warm beer accentuates any underlying flavours and with Wainwrights it unfortunately brought sweetness to the fore. Not ideal, but it went down easy enough as the last bell told us our night of adventure was coming to a close. Not too bad and I shall be keeping an eye on both the Major and the Sam.
Good Samaritan Ramsbottom