Twinkle Twinkle Little Star. Where Is All The Decent Beer?

November 07, 2008
The plan was to take it nice and easy and save myself for tomorrow. However, the Whitefield Holts Bandit had others ideas and proposed a post-work drink in Manchester. I was a little reluctant as I was already ensconced in the Peel. But, as the Highgate Red Rogue was proving disappointing-like most of their beers, I decided to go for it.
The first sign something was amiss was the delay to the tram service, apparently caused by heavy congestion in the city centre. This turned out to be a knock-on effect of the Christmas lights being turned on and I began to suspect that things wouldn’t run that smoothly pub wise either. So it turned out at our first stop-the usually reliable Marble Arch. It wasn’t actually the best time to visit the place, as it was very busy and you constantly ran the risk of people bumping into you. They had obviously been hammered during the afternoon as two pumps were derelict, the Budvar had run out and a lot of the food options weren’t available. Never mind I thought, there’s always the dependable Pint. Unfortunately, not on this occasion, as a burnt malt flavour competed with the usual hoppy finish. Have they been taking brewing tips from Bazens? Although JP Best and Pictish Brewers Gold were better, it was time to move on.
Down at the comfortable busy Angel we enjoyed Facers house beer. Nice to see it doing well and customers were starting to pile in looking for dining 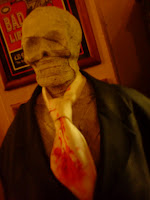 spots. Allowing myself to be guided by the WHB we called in at one of his favourites-Bar Fringe. Empty wickets here as well, but we managed a pint of Fernandes which was ok, if nothing special. However, squeezed in again, I couldn’t help but notice that it’s almost like a tourist trap-full of punters who know no better. The handsome guy pictured was in the Fringe on the table next to me and the WHB. Probably their last satisfied punter. Time to relegate the Fringe to the lower divisions, methinks.
Talking of relegation, our next stop was the Smithfield as I wanted to give it one more chance. It was strangely quiet-perhaps all the punters come in later for the controversial smoke lock-in? Yet again a strange selection on the bar. Seven beers on which were all dark and strong. I was all for leaving but by now the WHB was busily chatting to the couple at the bar and so we ended up trying Robinsons Chocolate Old Tom. What a way to spoil a classic beer-it tasted like they’d just thrown in drinking chocolate into the mix. Horrible. And the nice couple turned out to be Camra zealots who insisted on telling us why they were boycotting the Angel. Each to their own, but looking round, I knew which pub I’d rather be drinking in. I’ve heard that the local Camra are watching the SF closely but it seems that the initial momentum of the new owners has dissipated. Another one to put on the back burner until things improve.
Our finale was much better. The English Lounge was busy but we managed to grab a central table from which to watch the fun and frolics of a Friday night. The WHB took a (naturally) particular interest in a group of women obviously on something of a do. He soon elicited from a wee Scottish lass the information that it was a 50th birthday celebration. This prompted the reflection, from the usually unfussy, WHB that they must have had a hard life as they looked “past it.” He can be such a bitch sometimes. However, although the Copper Dragon certainly wasn’t past it, we eventually had to make a move nearer home. I just had time for a whisky nightcap in the Peel before getting some much needed kip for Saturday’s jaunt.
Manchester Pubs

Tandleman said…
Only tried one beer in the Smithfield the other night, but the Durham Gem was super.
9 November 2008 at 12:52

Anonymous said…
Durham is a regular but far too often it's the same beer range.Was Deep Dark Secret on? It seems to live there now.Definitely not as good as when the much lamented Jenny had it.
9 November 2008 at 14:58

Anonymous said…
Bar Fringe is a joke.It use to be filthy with smoking pillocks but now just seems full of...
9 November 2008 at 20:54