Showing posts from August, 2010
Show All

Changing Of The Guards 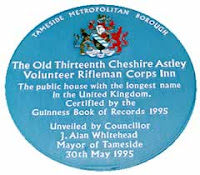 Congratulation to the latest pub saved from closure by the locals buying it. The Old Thirteenth Cheshire Astley Volunteer Rifleman Corps Inn has been purchased from Enterprise Inns for £110,000.
The pub, in Stalybridge, is famous for having the longest pub name in Britain and for once having been visited by Tyson the Beerhound. Ok, several pubs can lay claim to the second of those statements, but it’s still heartening news.
When I visited it served Wilsons Mild & Bitter and there was a certain buzz about this 1857 Inn. Seems some things haven't changed that much. As Rob Tonge, one of the quartet of new owners, put it: Pubs are shut down and boarded up every day. But we’ve been drinking here for years and would have been devastated had it gone to the wall”.
Let’s all drink to their success.
2 comments
Read more

I'd Like To Teach The World To Sing Drink

August 24, 2010
I was excited to read the headline “Portsmouth pubs asked to sponsor kids on alcohol course.” It consists of ten hours training with an exam to follow. At last, I thought, kids will be getting a proper education. No more RE or Woodwork for them.

I envisaged the future generation of drinkers learning the difference between Milds, Bitters, Porters and Stouts. Not to mention transgender-bending Mid-Atlantic Pale Ales. Sadly not. Apparently it’s an alcohol awareness scheme designed to teach youngsters the impact of alcohol on their health, career and social life.

All very worthy, but I prefer my idea.
1 comment
Read more

Some people get the glamour assignments: Rome. Paris. Madrid. Some people get Salford, Eccles & Patricroft. Such was my fate as I was invited to keep the Old Contemptibles company on their peregrination of some of Manchester’s fruitier outposts.

First stop was the Queens Arms in Patricroft. Known locally as the Top House due to its position at the top of the hill next to Patricroft station, it dates back to 1828 and can claim to be Britain's first railway pub, as it was built in the specific hope of catching the passing trade on the new Manchester to Liverpool rail line
Originally called the Patricroft Tavern when it opened, the name was changed following a visit to Salford by Queen Victoria in 1851. It’s currently the holder of the local CAMRA branch’s Traditional Pub of the Year Award and it’s not hard to see why. It’s beautifully maintained by long time licensees Lynn and Chris Benson.
Uncle Albert felt immediately at home in the cosy Victorian rooms and was in danger of becom…
3 comments
Read more 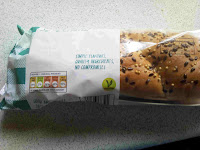 In the words of the great poet Lily Allen, everyone’s are all at it now. First we had the pubs and cafes attempting to denigrate the character of the honest-to-goodness ploughman’s. Now even the humble cheese & tomato sarnie isn’t safe. Hang your heads in shame M&S.


Now I don’t mind that they put it in a roll and call it something else. Or even that they sell it at an inflated price. But whose bright idea was it to cover it with mayo? Never mind, thinks I, there is always the “traditional” West Country Ploughman’s. Made with lovely West Country cheese, lovely West Country chutney...and mayonnaise!
This ConDem government really has got a lot to answer for. Not only are they threatening to crush our drinking rights, but they are now after our sandwiches. Come back Gordon Brown. Always remember, if I wanted mayonnaise. I would have been born French.
Get it sorted. *Shown for contrast value. The bastardised M&S abomination and the cheaper, much better, Greggs alternative.

Please Don't Pass Me By (A Disgrace) 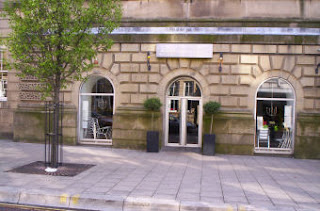 Automatic is Bury’s premier bar. Note, I say bar and not restaurant-all will become clear later. Now some beer bloggers struggle to tell the difference between a pub and a bar and write lengthy discourses on the subject. I have no such problem: if there is no bar rail to tie your whippet to and your feet don’t stick to the carpet, it’s plainly a bar.
So on that basis, Automatic is clearly a bar. It’s a bar that does food and does well out of it, having a prime location on Market Street. However, obviously, it does have plenty of customers who just go in for a drink, particularly at weekends when the music decibel gets cranked up.
A while ago it raised its game vis a via beer range and put on a couple of casks. Thereby attracting a different clientele and further widening its customer base. The local CAMRA branch were impressed and duly nominated it for inclusion in the 2011 GBG. This despite concerns that there was a potential problem with it-apart from possible throughput and that is…
2 comments
Read more 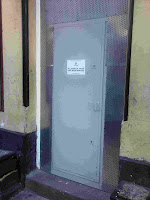 The Duke of Clarence (AKA the “Clarey”) on Silver St is once more closed and boarded. Enterprise Inns were reduced to a “Peaceable Re-Entry” in order to try and reclaim some of the monies owed by their light-of-foot tenant.
Seems apart from not paying his rent, he wasn’t paying any other bills, either. Not surprising as, in his short tenure, the pub was very seldom open. Well to the public anyway. He could, however, be often glimpsed through the open window playing cards with his mates or hosting a private drinking session.
On the face of it, it seems a nice change for someone to screw the might Enterprise Inns. But I doubt Ted Tuppen (CBE, don’t you know) will lose any sleep over it. And it’s always a shame to see a town centre pub down on its uppers. Despite the retail boom in the area, this could well be the last hurrah for the DOC. 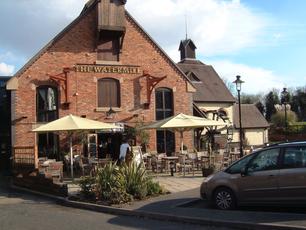 Congratulations to Peter Hill and his merry band of Black Country Ale Tairsters. Last Friday, at the Water Mill in Kidderminster, they reached the milestone of 15,000 on their pub tour of England, Scotland, Wales and Ireland.
They have been spending all their free time touring the hostelries of the UK since 1984. In that time, they have travelled some 250,000 miles, visited every pub in 11 counties and sunk some 92,000 pints. Apparently their favourite watering holes are the Powis Arms in Welshpool and The Highwayman in Sourton, Devon.

This is some achievement, but Mr Hill may have put his finger on the secret of their success: “None of us are married, which is a good job, because I don't think wives would be too happy playing second fiddle to pubs and beer." 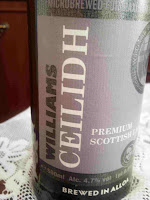 It’s the age-old problem. You stagger in after a session and fancy a late night feast. But what to do? You can’t get a decent pizza delivered at 3am and you can’t be bothered (i.e. too drunk) to do anything very elaborate.

Never fear: you have your ravioli saved for just such an emergency. Just heat the sauce up and bedtime snack here you come. Only one problem-you realise you haven’t got any sauce. Never fear: it’s time for a bit of FABPOW. That’s food and beer matching to you and me.

In this case it was Ceilidh, kindly donated by William Bros. This is a 4.7% lager that when served cold and crisp is easy-going with a sweet malt aftertaste. Once warmed up, unfortunately, the malt comes to the fore too much for my liking and you don’t get the promised citrus notes.
However, where it does come into its own is as Bolognese sauce substitute. Pour it over pumpkin ravioli and you have an interesting combination of flavours-the sweet malt seemed to really bring out the delicate pumpkin flavo…
3 comments
Read more
More posts