Showing posts from October, 2010
Show All

Are Spoons Feeling the Squeeze? 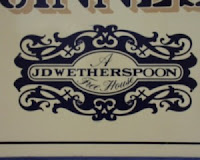 Wetherspoons have built up a very successful business model and a reputation for prospering in hard times. However, a number of subtle hints have appeared that suggest that every bargain boozer’s favourite pubco may be feeling the pinch.

First came the repricing of their guest ales. This has seen them remove the one-price-for-all charge and introduce different bands according to strength. A necessary measure, it was felt, to try and redress some of the lost revenue. Of course this is already common in other pubs, but was apparently opposed by some managers who were afraid of losing sales.

More recently came the revelation that despite selling some 400,000 breakfast each week, it wasn’t actually making much from them. Some analysts felt they had simply priced them too low. Makes a change for a pubco, I suppose.

Now two further changes are coming into force without too much publicity. One is that many of their pubs are abandoning their 7am opening and will now be opening at 8am instead…
11 comments
Read more 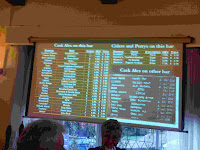 The dust has settled and the tables cleared. Yes, the latest Hare & Hounds beer festival has come to an end. After 10 days and some 170 beers (plus assorted ciders and perrys) all served the correct way: i.e. through sparklered handpump, it’s time to tally up.

There was the usual cluster of favourites and go-to beers. Castle Rock Harvest Pale, Allgates Motueka and all of the Pictish offerings were eagerly consumed. Not to mention Brewdog Trashy Blonde. But there were plenty of new delights to be had as well.
Ashover’s Hydro owed more than a nod to Marble Pint, but nothing wrong with that. Coastal from Redruth in Cornwall also surprised many with its light (3.7%) but citrus packed Hop Monster. Also very moreish was the Cambridge brewpub (White Hart) Ufford’s Green Bullet. Meanwhile Blue Monkey consolidated their reputation with the well balanced, but bitter finishing, Guerrilla Stout.
Of course not every brewery shone. Burton Bridge Knot Brown Ale at 4.7% was heavy and cloying. Toad…
1 comment
Read more 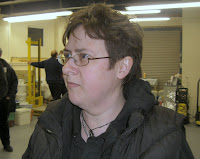 Mallinsons Brewery can be considered amongst the top rank of UK microbrewers. I was going to say amongst the up and coming, but as they have actually been brewing for 2.5 years, I think it’s fair to say that they have arrived.

Sir Tandleman has already covered the basic logistics of the trip, so I will just summarise. An eager group of CAMRA freeloaders descended on a converted garage in Lindley, Huddersfield, and proceeded to drink the place dry.

Tara, the brewster, entertained us with her simple, but effective, brewing philosophy-no brown beer, lots of hops etc. Meanwhile the hordes of CAMRA wildebeest hungrily eyed up the first lone, vulnerable, cask offering. For the geeks-this was Dominator, a 3.9% very hoppy beer brewed with Centennial and Simcoe hops and lager malt.

A perfect example of the evolutionary directive: it really was dog eat dog and survival of the fittest. Picture the scene-thirsty imbibers shuffling ever closer to the firkin; no one willing to break from the group un…
7 comments
Read more

Beer Style: Does It Matter?

I knew there was a reason why I drank. It’s ‘cos I’m very intelligent. Yes. Really. Honestly. It’s a scientific fact. Or a hypothesis anyway. That is just the same in my book.
It goes like this: The Savanna-IQ Interaction Hypothesis (hereafter “The Hypothesis”) suggests that less intelligent individuals have greater difficulty than more intelligent people with comprehending and dealing with evolutionarily novel entities and situations that did not exist in the ancestral environment.
Basically, thickies have trouble in dealing with new ideas and situations. Conversely, evolutionary psychology in the form of the Hypothesis would suggest that more intelligent people are better able to deal with new ideas and situations.
So applied to our personal tastes and values, this all means that more intelligent individuals are more likely than less intelligent individuals to acquire and espouse evolutionarily novel preferences and values.
This is where booze comes in. 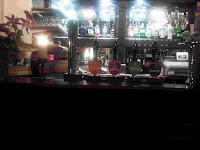 It was Friday night and I was offered a bit of this or a bit of the other. Being a beerhound, I chose the other: A chauffeured trip over to Sheffield; the valley of beers.
After a dark and winding, somewhat mysterious, drive through the Snake Pass, we reached our first destination.The Crickets is hidden away down Penny Lane and is apparently close to the very posh end of South Yorkshire. Yes, apparently they do have one.
Presumably that’s what influenced Thornbridge to lease the pub from Enterprise. Despite its isolated location it had the potential to attract punters by offering a good food led operation. They’ve certainly gone for it in a big way-and I don’t just mean the A3 menus-with a very interesting selection and from what we could see, nicely presented.
The pub itself is posh. Stone floors, big sturdy furniture, candlelit tables, that sort of thing. But I liked it. After all, I can do posh occasionally; sometimes I even have a paper napkin with my black pudding.

The staff were…
7 comments
Read more

The Princess & The Grog

A hilarious rib tickling tale ripped from the pages of the fourth estate.

Princess Eugenie (daughter of Andy & Fergie, apparently) is studying English and the History of Art at Newcastle University. Now, like all students, it appears she likes a drink. And, like most people, she chose to buy her grog from her local Tesco.
This is where it gets hilarious. The cashier at the store in Jesmond thought she looked younger than her 20 years and demanded proof of ID. But when she flashed her student card, according to the Daily Mirror, “the man immediately spotted who she was and squirmed with embarrassment”.
Not only that, but apparently “Other shoppers in the Tesco at Jesmond, Newcastle, struggled to hide their amusement at the gaffe.” One explained: "It was funny. Obviously everyone else in the queue knew exactly who Eugenie was.”
Hilarious? Not really. I wouldn’t have recognised her either. Dare I suggest that she may not be quite as famous as some at the Mirror would seem to believ…
9 comments
Read more 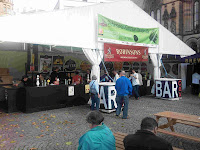 Manchester’s Food & Drink Festival came to a festival-like conclusion over the weekend. For once the weather gods smiled down on their chosen people and allowed sunshine to reign over Albert Square, thereby giving visitors a rare opportunity to indulge in some al fresco imbibing.
Stockport’s very own family-brewer Robinsons were in charge of the Pavilion Bar which was used to showcase no less than 12 of their beers. This ranged from the delightful Old Stockport through to the rare-on-handpump Ginger Tom and the sickly Chocolate Tom. I tried the festival special-Manchester Icon-and found it tasted suspiciously like...Robinsons.
There were also a number of Old Tom foodstuffs available for the inquisitive foody. Everything from pies to ice cream, not forgetting Old Tom cheese and Old Tom chutney which mysteriously found their way home with me. Hollands pies were also available for the less discerning, although to be fair, they did receive several positive comments. Were they using ring…
5 comments
Read more

The Good Pub Guide 2011 has excluded 381 pubs from this year’s edition after a flood of complaints. It claims that the number of dissatisfied pub customers has risen from 3/10 to 4/10 since publication of last year's guide.

Staff shortages and surly landlords were the most common complaints. Other complaints included: a smelly roaming dog, grubby surroundings, overpowering TVs, piped music, poor choice of beers and food not up to standard.

This beggars the question-are pubs really getting worse or are just more people complaining? However, it’s not all bad news and some pubs were singled out for particular praise. The Tempest Arms at Elslack, Yorkshire, was named as the overall 2011 Pub of the Year, whilst the famous Watermill at Ings picked up the gong for best beer pub.

There’s an interesting comparison with the GBG: The Church Inn at Saddleworth is praised for brewing its own beers and selling them for £1.70 a pint. No mention of quality. On that basis the pages should be pa…
5 comments
Read more

This weekend gone was the start of Manchester Food & Drink Festival. As the title suggests, this is a celebration of the delights of local food and drink. But it’s just not black pudding and tripe. Oh no, there’s fancy chocolate and stuff like that. And cheese, but more of that later.


Friday afternoon saw the launch of our very own Oktoberfest in Albert Square. I’m not sure if it was raining in Munich, but it certainly was tipping down in Manchester. Luckily there was Kaiserdom Pils, Helles, Dunkel and Hefe-Weissbier to calm our nerves.

Just to add to the German experience, there was a genuine Oompah band playing gallantly away. And plastic glasses. Yes plastic. Which you had to pay a deposit for. Despite not being allowed outside of the festival bar. The original idea of serving beer in seidels was apparently vetoed by the local bobbies who obviously see all Mancunians as Frank Gallagher types.

There was also a selection of local real ales to try. Unfortunately they weren’t helped…
2 comments
Read more 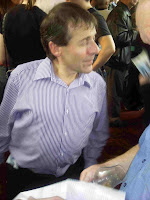 Saturday saw the second Manchester Whisky Festival take place at the Castlefield Rooms. After stories of last year’s binging leaked out, it was no surprise that this was a sell out. Who was going to miss out on the chance of (possible, but tricky) five hour’s (one more than last year!) drink all you want whisky?

There was, perhaps, a surprising mix of punters. Yes the white middle classes were well represented and the beer festival stereotypes were also there. But word had obviously got round; as the student presence showed-they know a chance to get off their head when they see it. And there were women. Old ones, young ones, potential nooky of all shapes and sizes, in fact.

But enough of this sociological discourse. What of the whiskies? It was interesting to try the full range of English whiskies from the St Georges Distillery in Norfolk. Both peated and unpeated versions had potential, but at 3 years old they were very green in whisky terms.