Showing posts from June, 2011
Show All

Monday night saw me once more at the Port Street Beer House for one of their themed evenings. This time it was American beer. Now I don’t need much excuse to drink American beer on a Monday evening, but the launch of the PSBH American Beer Festival strengthened my moral case.

With Bruce Springsteen and Johnny Cash playing in the background, the place soon filled with a mixed crowd. The curious, the interested, the scholarly and the disquisitive were all there. The young and beautiful, and the old and wise were all there. Oh, and Tandleman as well.
The goodies were supplied by James Clay of Vertical Drinks and we were treated to a few nibbles to get us in the mood. These were very welcome; although the rush for the cornbread slowed somewhat once it had actually been tried.
Four beers were sampled
Left Hand 400 Pound Monkey I generally like Left Hand beers, but this one wasn’t to my palate. Described as a “balanced IPA”, it appeared that “balance” in this case meant throwing in a lot of diff…
3 comments
Read more

Talking of cider and the like, last weekend saw the inaugural Greater Manchester Cider & Perry Festival. The first, I believe, such event to be staged anywhere north of the Watford tunnel. A welcome addition to the festival circuit, it offered a rare chance for cider heads to sample around 60 ciders and perries.
It was, as these things tend to be, a very sociable affair, and was well-run by the people on the ground. One definite problem, though, was the venue. It was held in Copper Face Jacks, which is basically the basement bar of the Palace Hotel in Manchester. No natural light and no natural cooling. It gets warm down there. Very warm.
Now this isn’t a problem if you’re just drinking the usual chilled keg stuff or a bottle from the fridge. However, offering uncooled cider and perry to thirsty punters on a summer’s day, doesn’t do anyone any favours. Apparently the heating was to blame for Friday, but even without that excuse, Saturday’s offerings were simply too warm.
Everyone w…
6 comments
Read more

As we all know, times are tough, and we’re all in it together. You’ve got to earn a few bob where you can. And so if you happen to have an orchard that delivers a bumper crop, what better way to utilise that than by turning the surplus into cider?
And that’s exactly what dear old HRH Lizzie is doing. Yes, this autumn our gracious queen will be flogging cider from her Sandringham estate. The orchards there now cover 65 acres and produce 150 tons of apples each year. This will allow her to produce 1000 jugs of 6% apple nectar at £2.50 a pop.
Whether she will be manning the cider bar herself is, at present, unknown.
*The cartoon is courtesy of the Daily Mail
2 comments
Read more

Tales of a Munich Virgin

Five days soaking up the culture of Munich is a sobering experience. Five days on the piss, soaking up the beer of Munich isn’t. It’s rather knackering, actually. But mix the two and you can have yourself a great time. In fact, you can save yourself some time and energy by eliminating the former. After all, what self-respecting member of the bloggerati would waste valuable drinking time on culture?
The first thing you notice about Munich is that although it’s big, it’s perfectly navigable once you get your bearings. There are the S-Bahn and U-Bahn rail systems, but like many cities, the best way is to see it on foot. Alas, like many cities, they seem to have an aversion to signposting the streets, but a good map and/or sat nav to pinpoint your position should help with that.
Another, somewhat surprising, discovery was the relative difficulty in obtaining a late drink. We’re not talking about a very late drink, but just a nightcap. Tandleman (yes, Mr München was there) and I set quite a …
11 comments
Read more

It’s still a work day, but the holiday is getting closer. So, in preparation, and to ease me into that frame of mind, I thought “let’s try something different, but appropriate”. Welcome, Kernel Imperial Marzen.
Basics: This is a collaboration brew with Dark Star. Such a combination was always going to lead to something unusual and here we have it. It’s 330ml, bottle-conditioned, and weighs in at a respectable 9.1%.
It poured amber with good carbonation and a small off-white head. The aroma was quite pungent; marmalade, caramel and some citrus tones.
Taste: It’s got a surprisingly smooth mouthfeel for a beer of this strength. Lots of sweet, fruit malt which is nicely rounded out by the citrus hops.
Finish: Slight fruit bitterness.
Conclusion: Not a traditional Marzen, but well rounded and very palatable, nonetheless.
2 comments
Read more 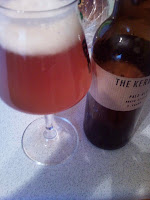 Basics: It’s 500ml, 5.5%, and bottle-conditioned. It poured amber with good carbonation and a large off-white head. Aroma was pine and grapefruit.
Taste: Medium bodied and soft on the palate. There’s a very enticing cluster of citrus hops: orange and grapefruit, in particular, that give it a dry edge without going overboard with bitterness levels. This in turn means it drinks well under its strength and is very moreish.
Finish: A medium level of lingering dryness.
Conclusion: No surprises here. Yet another winner from Kernel. A very tasty and accomplished beer. You could easily have two or more at breakfast...
Post a comment
Read more 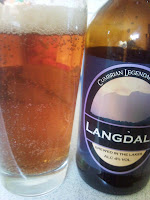 The basics: It’s a 500ml bottle and weighs in at 4%. It poured golden-bronze with good carbonation and an off-white head. The aroma was malt and a waft of orange/citrus fruits.
Taste: It becomes moderately bitter after an initial sweet malt start. There’s a nice biscuit malt undertone which gives way to a floral hop bite. It’s easy on the gullet without being thin.
Finish: Short and slightly dry.
Conclusion: A good session beer. It’s a well balanced mix of fruitiness, malt and just enough bitterness to stimulate the palate. Quite moreish and is best seen as a summer beer.
1 comment
Read more
More posts