How Low Can You Go?

January 22, 2012
Global brewery giant AB InBev have announced that they are to cut the alcoholic strength of their three main brands from 5% to 4.8%. This reduction of Becks, Budweiser, and Stella Artois may mean little to the likes of you or me, but can be seen as indicative of current drink trends.

Certainly that is the official AB stance; that it is merely reacting to current UK trends and that “most drinkers won’t bat an eyelid as long as the 4.8% brews deliver on taste”. Quite possibly, but there is another explanation. According to industry sources, AB were pushing for yet another price rise-something the big retailers weren’t happy with. This left AB little choice: if its margins were to be maintained, then ABV had to be cut.

Of course, ABVs have been quietly coming down across the board for some time now. Stella itself was once 5.2%-it still is abroad-and I’m sure the estimated duty saving of £8.6m on its new lower strength version will put a smile on some AB executive’s face. 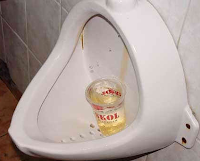 I can’t say I’ve tried any of these and look forward to sampling them. But judging by my experiences so far with very low alcohol beers, I don’t hold out much hope. However, the way things are going, it may not be too long before you are popping into your local and asking for “A pint of pisswater, please.”
Beer Duty Weak Beer

Curmudgeon said…
As well as saving duty, it also has the added bonus of appeasing the anti-drink lobby.

Frothy said…
As an experienced brewer I worry for the shelf life of proper real Ales being served at 2.8%. Its all very well for pasteurised commercial beers but REAL ale will loose a lot from the preservative properties of the alcohol. Matt
22 January 2012 at 18:45

Chap said…
Agree about the motivation behind InBev's move. As far as the low alcohol beers go, Ray Welton's Pride & Joy has been a boon to Sussex drinkers who want to enjoy the pub but have to drive home afterwards, and it won't let you down, tastewise (for a time). Some of the Bamberg alcohol-free beers also taste OK for a time. But the only real reason for drinking these beers is circumstances.
22 January 2012 at 19:12

Tandleman said…
This article is rubbish. You have missed out JW Lees Golden Lite.

Tyson said…
Although I'm obviously a huge fan of Golden Lite, it isn't in the list as it wasn't at the parliamentary tasting.
24 January 2012 at 09:21