Showing posts from September, 2012
Show All

Something a little bit different today. A Scottish Pale Ale brewed by Old Worthy on the Isle of Skye. The twist here is that it’s made with peated malt barley from Ardmore Distillery. Interesting, eh? It’s a clever alternative to going down the Innis & Gunn route.
It’s a 330ml bottle and is 5%. It poured clear amber with good carbonation and a soft white head. It says it’s brewed with aromatic hops, but I didn’t get that. The aroma was subdued: a little bread dough and a little bit of pepper, but nothing else.
Luckily the beer itself had much more flavour than the aroma would lead you to believe. Light bodied with prickly carbonation, it was well balanced and avoided the usual pitfalls of sweet-especially Scottish-stronger beers. It certainly didn’t seem like 5%; which is always a plus point in my book.
Flavour wise, you’ve got some good crisp, lager-esque, malt tones in the background and pepper hops upfront. The peat is very cleverly used. It could so easily have become overpoweri…
4 comments
Read more 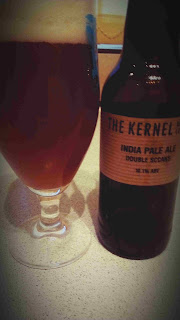 Monday morning and you need something to set you up for the week. Something to kick-start the good times and wave goodbye to the Monday morning blues. Step forward, Kernel Double S.C.C.A.N.S..
This is a big boy’s hop bomb. It’s their S.C.C.A.N.S (Simcoe, Columbus, Citra, Amarillo, and Nelson Sauvin) but double. This means it weighs in at an impressive 10.1% and comes in bottle-conditioned 330ml form.
As per usual with Kernel, it was very lively and poured hazy golden-orange with a large off-white head. The aroma was pungent: lots of grapefruit, gooseberry and pineapple and lychee. It was medium bodied and the taste was intense. Lots of sharp citrus flavours; mango, peach and orange peel were all in there and a hint of buttered toast.
Although the alcohol peeked through, it was mostly muted by the intense hop combinations and the finish was long and dry, grapefruit like. This is not a subtle beer: your taste buds are soon overwhelmed and it’s like being constantly punched with a hop buck…
Post a comment
Read more

Oktoberfest: To Snort Or Not To Snort?

Thanks to Arthur Daley for pointing me to this great Friday story...

Organisers at this year’s Oktoberfest have said nein to an idea for barmaids in low cut dresses to sell fake cocaine to customers. This has spoilt the plans of businessman Wolfgang Stanek, who says he invented 'Wiesn Cocaine' - or festival cocaine - especially for the Munich beer festival.
Mr Stanek claims that the sealed £5 sachets contain nothing stronger than sugar and menthol, which give a natural high when punters snort it through a supplied straw. He explained: “We are anti drugs. Our mixture just gives drunks a little shake to wake them up.”
However, the authorities were less than impressed and plan to ban its sale amid fears that it will distract customers from the beer and make it harder to spot real drug users. A spokesman said: “We don't want cocaine, nor do we want a sugar mixture which looks like cocaine. We just want guests to enjoy our beer, nothing else.”
I really must try and get some for nex…
Post a comment
Read more

Congratulations to the Cock in Hemingford Grey, Cambridgeshire for scooping the Good Pub Guide 2013 accolade of Pub of the Year. It sounds a very nice place and has certainly changed from the “smoky local boozer” it was eleven years ago.
The Cock tops a long list of winners included in this year’s guide. Perhaps not surprisingly, it’s the Beer Pub of the Year: the Fat Cat in Norwich that really interests me. This is the sort of pub that is very unlikely to win the guide’s overall prize, but seems a “real” pub. There are however a lot of category winners-they are listed here, and I do like the idea of an award for Best Outdoor Loo.
One thing you will notice is a severe shortage of highlighted pubs in the grim North West. The likes of Greater Manchester and Cheshire may boast some of the country’s finest, but they rarely chime with the Home Counties direction of the GPG. This has been an ongoing problem for the GPG and is one of its flaws that needs addressing.
It was way back in 2009 th…
2 comments
Read more

Is Yours Straight Or Curved?

Does the shape of your glass affect the speed of your drinking? Yes, according to new research by Bristol University’s school of experimental psychology. They found that drinkers consume beer almost twice as quickly if it is served in a “fashionable curved glass” rather than a straight glass.

Based on a study of 160 social drinkers aged 18-40, they found that drinking from a straight glass, the drinkers took on average 12 minutes to drink 12 fl oz of lager. However, given a curved glass, drinkers on average took only 7 minutes to complete the same task. Interestingly, there was little variation if the beer was replaced by a soft drink.
The explanation seems to be that it is more difficult to judge quantities with a curved glass compared to a straight glass. Participants were asked to study pictures of glasses to determine whether they were more or less than half full. There was a strong correlation between those that had the largest margin of error and the speed at which they had consum…
3 comments
Read more
More posts