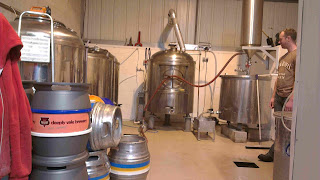 Bury, as the official brewing capital of Britain, can lay claim to breweries ranging in size from the in-a-garage Ramsbottom Craft to the monolithic Outstanding. And somewhere in-between we have the new kid on the block, Deeply Vale. Started in November 2012 by Jim Stewart, a one-time familiar face behind the pumps at the Trackside, DV has quickly established itself on the local beer circuit.

The premise is simple. To brew a small core range and build from there. Currently there are three beers in the range; with DV8 recently picking up beer of the festival at the Ramsbottom RNLI event. Jim is particularly fond of this beer as, being a dark beer fan by nature; he considers it the ace in his pack. Plans are afoot, however, to add another beer to the range. Given his predilections, Jim would like to do a brown ale, but is asking for suggestions. I’m pushing for an IPA. 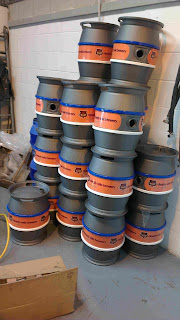 The brewery is an impressive little number with Jim doing all the installation, bar the electrics, himself. The floor had to be raised to enable drainage, but it’s all systems go now. The 2.5 barrel plant was purchased from the defunct ABC brewery and there is room, and plans, to add to the two existing fermenters. Demand for DV beers is growing and Jim has had to get in extra barrels to cope with demand.

It’s good to see another local brewery doing so well and it must partly be down to Jim’s enthusiasm. He is doing, after all, what he describes as his “dream job”. Another reason is the quality aspect. If truth be told, a lot of micros struggle early on with quality and some never improve. DV have hit the floor running as far as that is concerned and due to their cooperation with Privateer and Ringway, their beers are to be found in an ever expanding area.

In the immediate future, DV beers will be showcased at the upcoming steam weekend at the East Lancs Railway and at the Fisherman’s Retreat Beer Festival. Then there are plans for bottling as several outlets have requested them and Jim has a contact that may prove useful in a future distribution deal.