There has been some discussion within the online beer community as to whether craft beer has broken out of its ‘bubble’. Specifically whether it has landed, the so-called Brewdog test, in your local Wetherspoons yet. Like the Loch Ness monster there have been several reported sightings but, like George Osborne’s economic plans, they don’t seem to hold up to scrutiny. But it looks like, in Manchester city centre at least; that the Brewdog test has-literally-been met. Albeit in bottled, not draught, form. 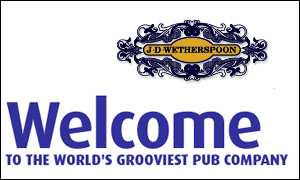 Manchester city centre is in one of these craft ‘bubbles’ and the arrival of Brewdog, alongside the likes of Port Street Beer House, has helped accelerate the demand for draught and bottled craft beer. At a price, naturally. Now Tim Martin’s little emporiums have always been given flexibility to react to local markets: the Heywood branch was for many years the cheapest in the country. So it should come as no surprise that they want a piece of the Manchester craft scene.


After all, it makes sense. They’re not going to have to deviate too much from their winning format but if a tweak here and there can generate extra business, then so be it. And the easiest way to accomplish that is through their bottled beer range. Traditionally the Wetherspoons range has been pretty poor. The usual suspects interspersed with some cheap foreign imports. No quality German beers and certainly no American beers. And, of course, no British craft.


Now that’s all changing as a range of bottled craft beer is being rolled out. A small but solid list that includes the likes of Brewdog (cheeky or merely a prelude to the arrival of draught Punk IPA?) and Goose Island. Naturally being Wetherspoons, they are knocking them out cheaper than their rivals. The Waterhouse has priced them at £3.35 a bottle, which I make to be an average saving of 19%.


This is isn’t going to see craft geeks desert their usual watering holes and decamp en masse to Wetherspoons, but it’s a welcome development, nonetheless. Hopefully, it won't be too long before every Spoons has a decent bottled range.
Brewdog Craft Beer JD Wetherspoon

Paul Bailey said…
JDW's current bottled line-up isn't that inspiring, and that's puting it mildly! They appear to have tweaked it slightly over the years, but until this latest announcement their selection seemed to have got worse, rather than better. I will keep an eye on our local Spoons outlets, (we have three in the area), to see what transpires.
3 October 2013 at 19:06

Tyson said…
It will be interesting to see how quickly this 'craft' range appears elsewhere.
4 October 2013 at 07:25