And we’re off. Yes, the Wetherspoons beer festival is once more upon us. What’s that you say? It starts next week? Yes, to you mere mortals, perhaps. But up here in the cutting edge of Lancashire, we are given the same status as London and have started early. Now once upon a time, a Spoons festival was highly anticipated. I remember trekking round Manchester with a well-known beer blogger in search of an elusive beer or two. However, the last couple have been a little lacklustre and cost cutting seemed evident when the last once couldn’t even produce a decent programme. 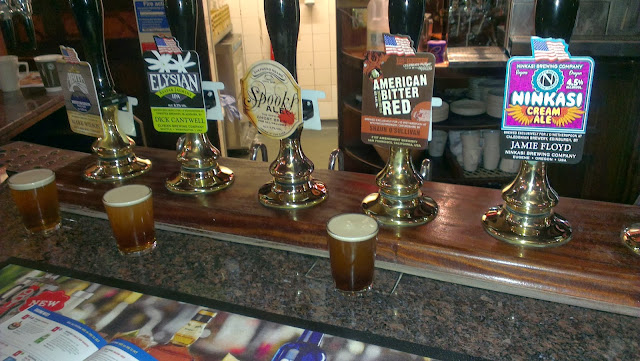 To their credit, they have taken the criticism on board and have promised a much better experience this time around. The programme is certainly an improvement. Fitting in with their plan of flirting with craft and bringing over American brewers, they have a range of USA beers brewed at various breweries around the UK. This is obviously their pièce de résistance and has had the ticking fraternity frothing at the mouth for some time. When actually faced with them; they revert to playing beer bingo and ticking their-alphabetically arranged, naturally, lists.


But are they any good, Tyson, I hear the cheap seats shout. Well, having had eight of the ten available, my initial thoughts are:


Stone Supremely Self Conscious Black Ale
Easily the best of the bunch. A stunning Black IPA that really delivers in the hops department. When I tell you that the Cascade, Centennial, Citra, First Gold, Galaxy, Simcoe and Sterling are used to maximum effect, you may get an idea of just how good this is.


Terrapin Tree Hugger
Not really to my taste, but this is a solid attempt at an Altbier. Spicy hop aroma and definite notes of caramel and toffee. Spoilt for me by a Shepherd Neame tang, perhaps not surprising given where it was brewed.


Elysian Avatar Jasmine IPA
Elysian are a very good brewery and Dick Cantwell has travelled all the way from Seattle to Thwaites to brew this speciality IPA. Crisp and floral, the jasmine is subtle enough to carry it off.


Ballast Point Even Keel
Brewed at Marstons, this was the dud amongst the bunch. Supposedly full of lemon and grapefruit, in reality it had crystal malt weeping from its arse and was a malt mash disaster.


Tonight I’ll be wearing my Union Jack underpants and trying some of the British brewers’ efforts. I do the hard work, so you don’t have to.
American Beers Spoon Fest