March 25, 2014
The Bermondsey Beer Mile has quickly established itself as something of a cultural phenomenon in London. For those not in the know, this is basically a crawl of the six breweries located within a mile of each other in Bermondsey. Except, just as locally the Rammy Mile run was never exactly a mile, this one is that bit longer as well. But no matter; it’s not been going long but it is already drawing in crowds of hipsters, stag parties etc; a la Borough crawl. Now having been to some, but not all, of the breweries, it didn’t take much for me to agree to lead a raiding party there.


It really doesn’t matter which end of the crawl you start from, but I would suggest Fourpure at South Bermondsey first. The Northern Line will take you to London Bridge where you can swap to the overground service for a train to South Bermondsey. While you’re waiting you can admire a very close up view of the Shard. The journey only takes 5 minutes but you may wish to check if the mighty Millwall are at home. Otherwise you may be somewhat baffled by the police presence that awaits you and the incomprehensible chantings of the locals. 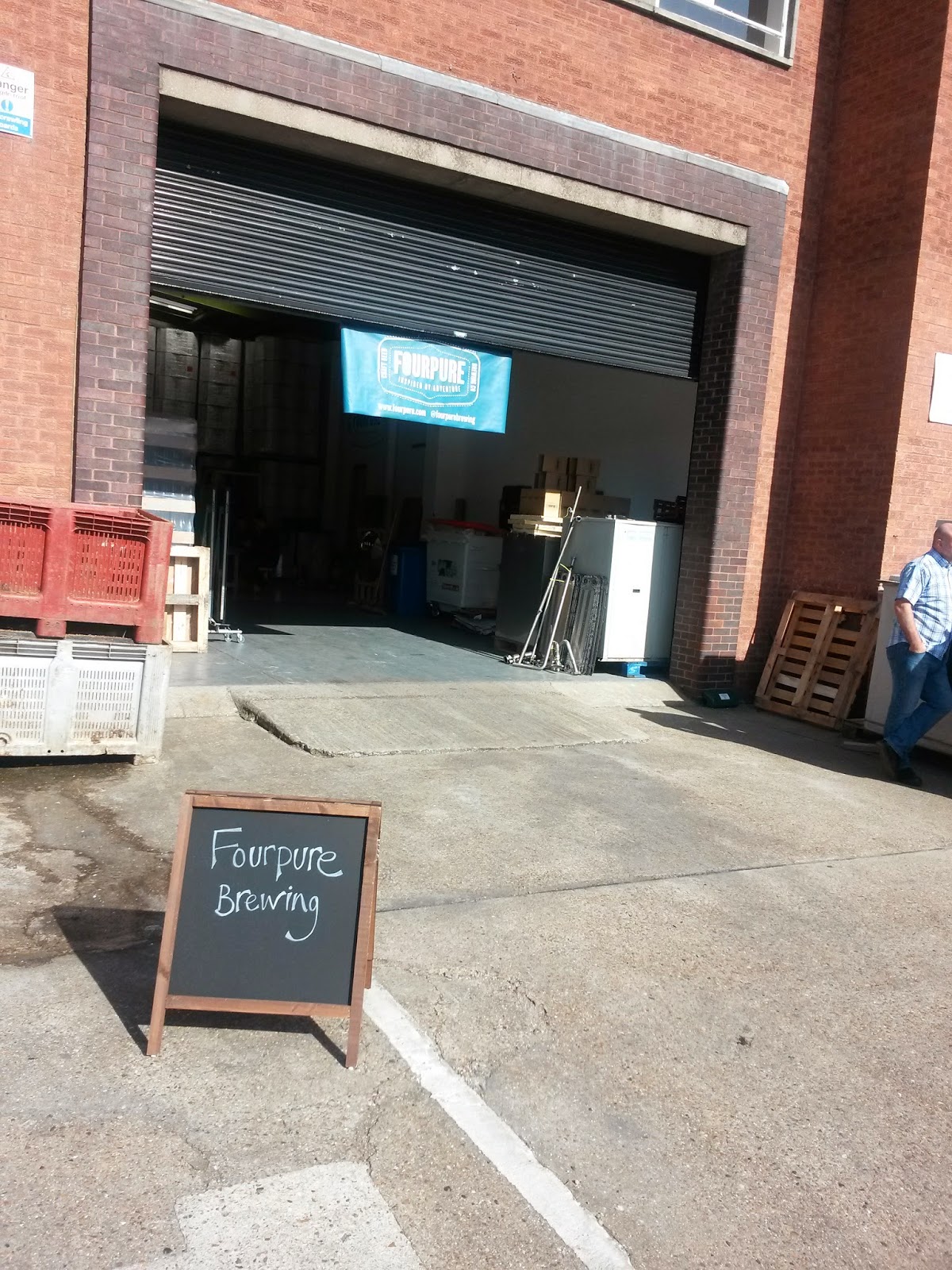 Walk out of the station into Rotherhithe New Road and turn right. It’s only a very short walk before you’ll see an industrial estate. Turn right into this and then follow the road to the left until you pass under the railway bridge. Fourpure is just ahead of you at unit 22. And a very nice setup it is, too. Bright, modern with a few tables and one long bar. It’s owned by two brothers: Dan and Tom, who work as part of a small team that includes John Driebergen as head brewer. 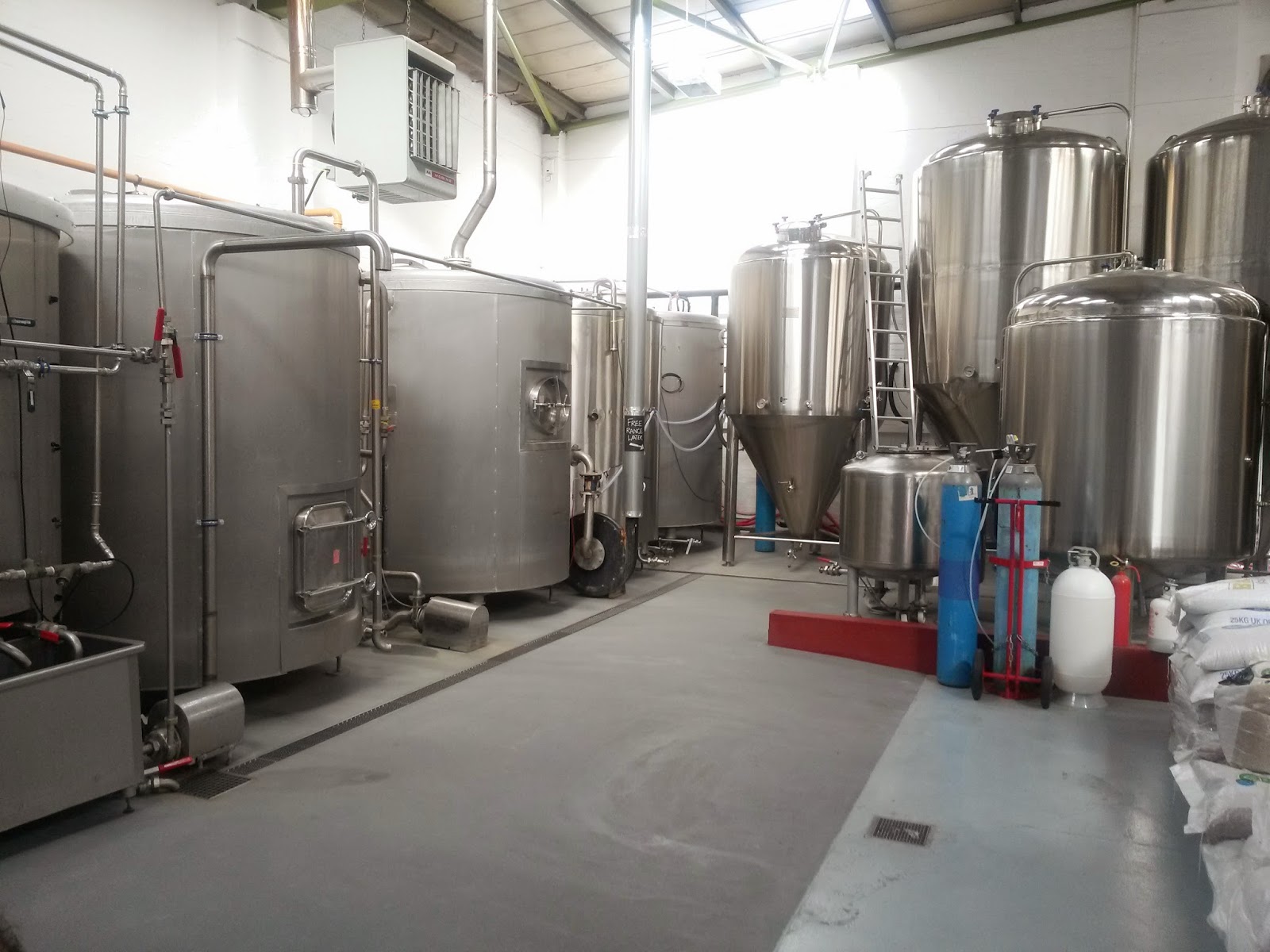 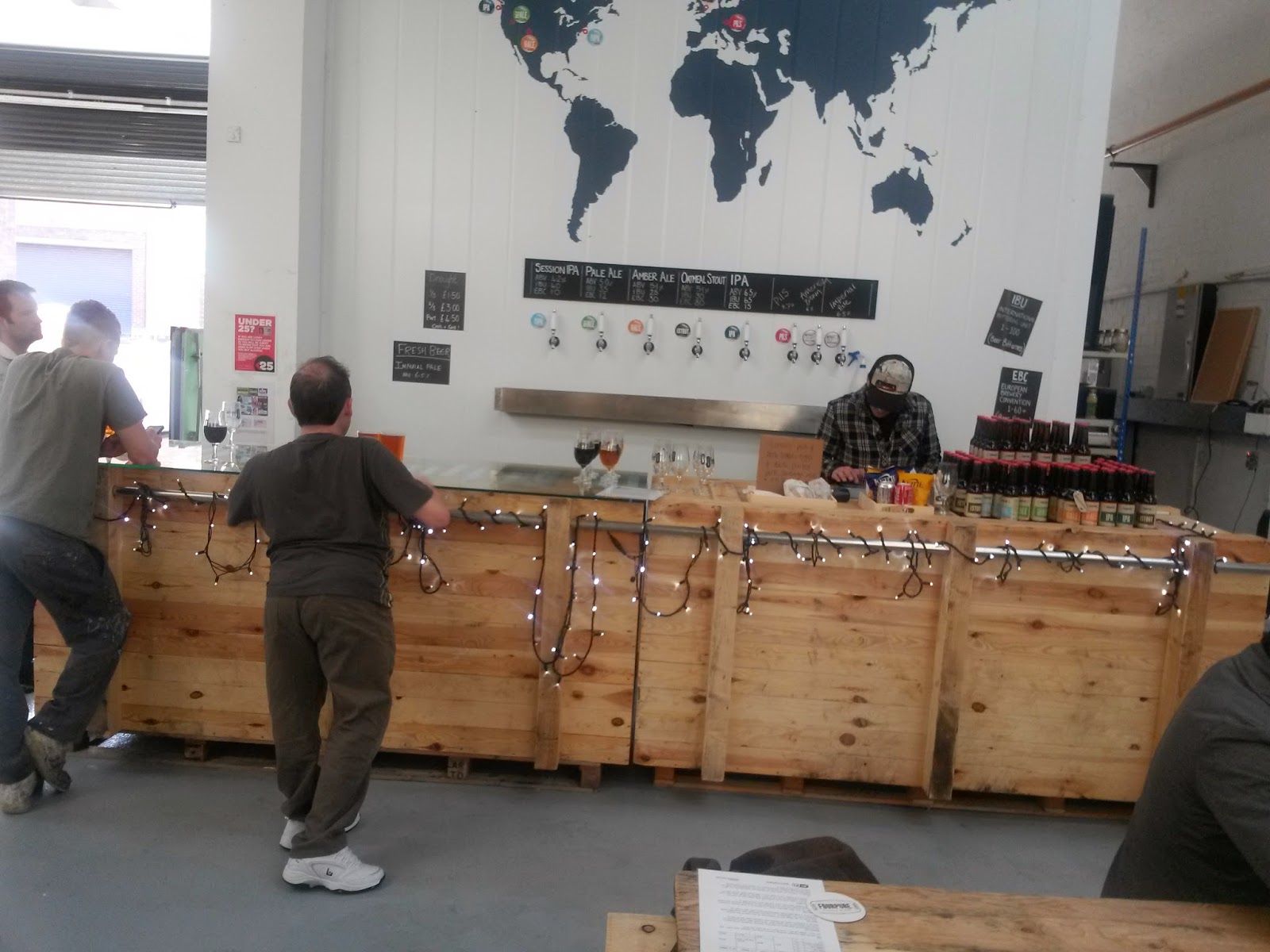 The clue’s all in the name with Fourpure: malt, hops, water and yeast. They don’t fine their beers and the beer range is chosen, I was told, on the simple basis of what beers they want to drink. There was a choice of seven beers, all marked up on a board that gave information such as strength (including OG), IBUs, EBC (that’s colour to you) and even the inspiration behind each beer. So we know that the Session IPA (4.2%) was inspired by bowler hats and New York cabbies. It certainly was tasty: crisp with a good floral hop kick to it.

Working your way round, you could have an Amber Ale, Pale Ale, IPA (tasty Oregon style, piney and resinous) Oatmeal Stout, Pils and an Imperial Pale. But at some point, you do have to leave. Retrace your steps towards the station and cross at the zebra crossing before turning right into Galleywall Road. Walk down here until you see the Ancient Foresters on the junction with Southwark Park Road. At the side of the pub, running the breadth of the railway arch is Almond Road where Partizan is to be found at Arch 8.
There have been a few grumbles of late about Partizan’s quality and certainly the Ahtanum and Centennial Pale Ale we had was less than gratifying. London murky you can deal with but when it’s agricultural and grainy with it, then you quickly move on. Heading for Kernel next, you go back to the Ancient Foresters and cross over to the shops opposite. Walk along these until you see Pyramid Pharmacy. Take the next right into St James’s Road and walk until you see the railway bridge in front of you. Ignore the road and take the pedestrian route by following the garages on the left until they bring you out directly opposite Kernel. 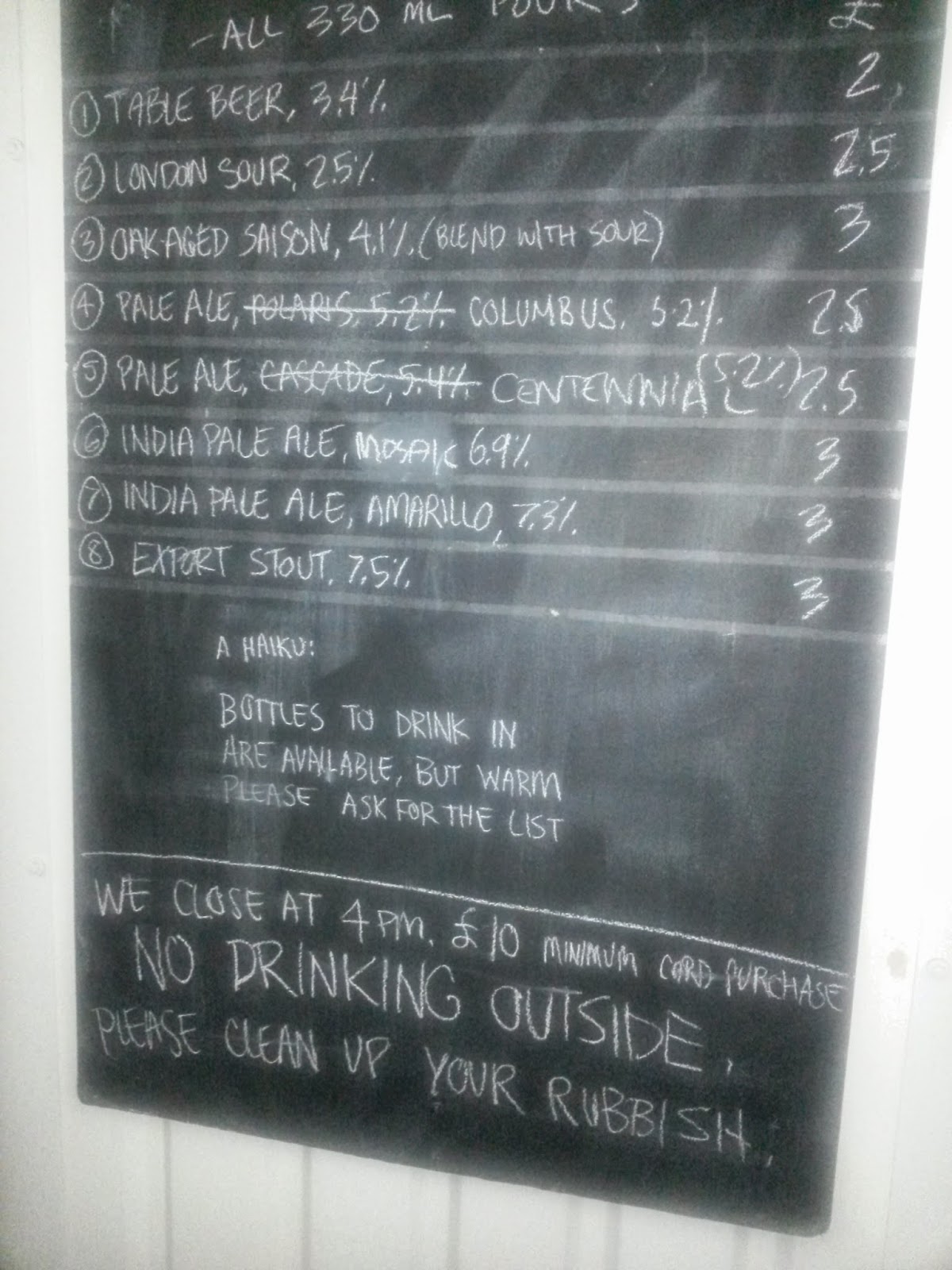 Not much to add that hasn’t been said before about Kernel except that they have tweaked the layout again. It was busy-as usual-but this tends to come in waves. Unfortunately one of the toilets was broken. A busted flush you might say. On the beer side; there were eight to choose from: ranging from the 2.5% London Sour, an oak aged Saison (blended with London Sour) to the 7.5% Export Stout. All served in 330ml pours. There is also a bottled beer list, but you are warned that these will be warm. 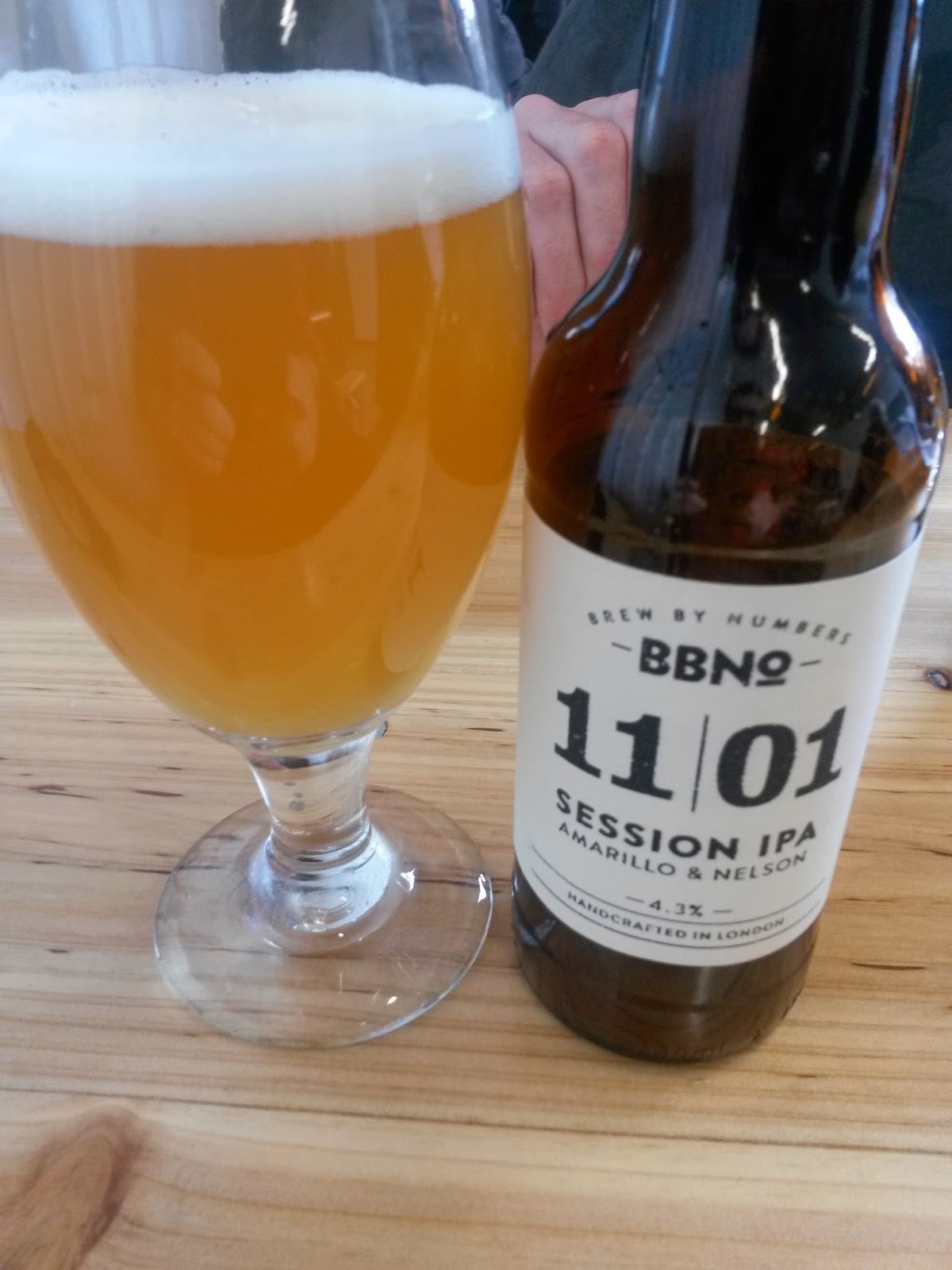 It’s only a hop and a skip to the next two breweries. Walk out of Kernel, keeping the railway to your right until you exit the yard. Turn right into the street and once more follow the railway arches as they take you into Enid Street where Brew By Numbers is at Arch 79. This has seen an upgrade since my last visit and has a small but good selection on draught and in bottle. Their new Session IPA (seems they are all the rage now) is a little 4.2% beauty. A refreshing blend of Amarillo and Nelson Sauvin lifts this into the moreish category. 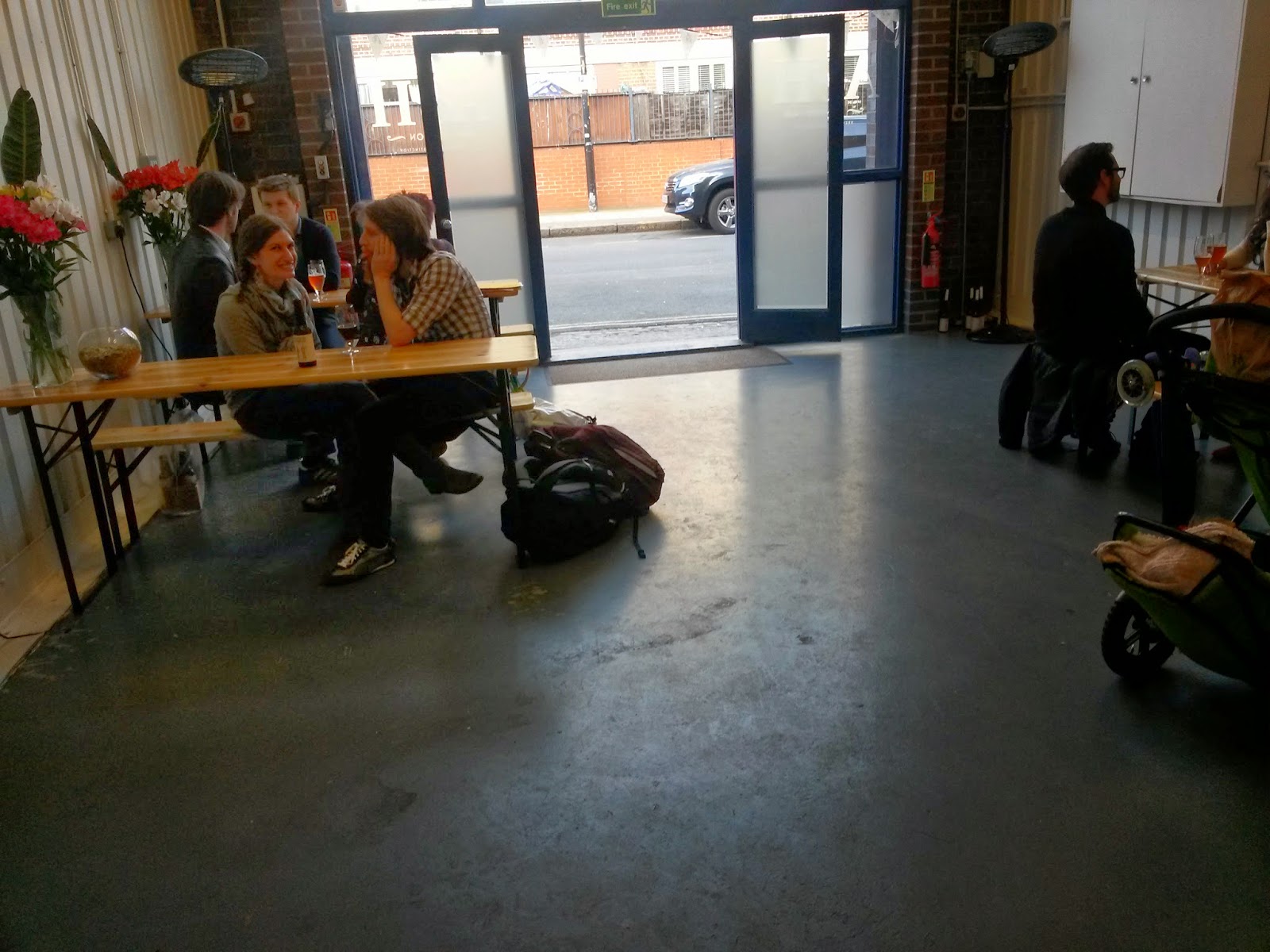 It really is only a short walk (or stagger) to the last stop. Turn right out of BBN, again keeping the railway on your right and go under the railway bridge. Make an immediate left into Druid Street and you will find Anspach & Hobday on the left at Arch 118. Although sounding like a Dickensian firm of solicitors, they are actually Paul Anspach & Jack Hobday. They actually share premises with another brewery-Bullfinch-but they weren’t there on our visit. A&H were offering bottles for £3.50 or two draught beers for £3 each. Their IPA was served via a hop rocket or Randalizer to give it its technical name. 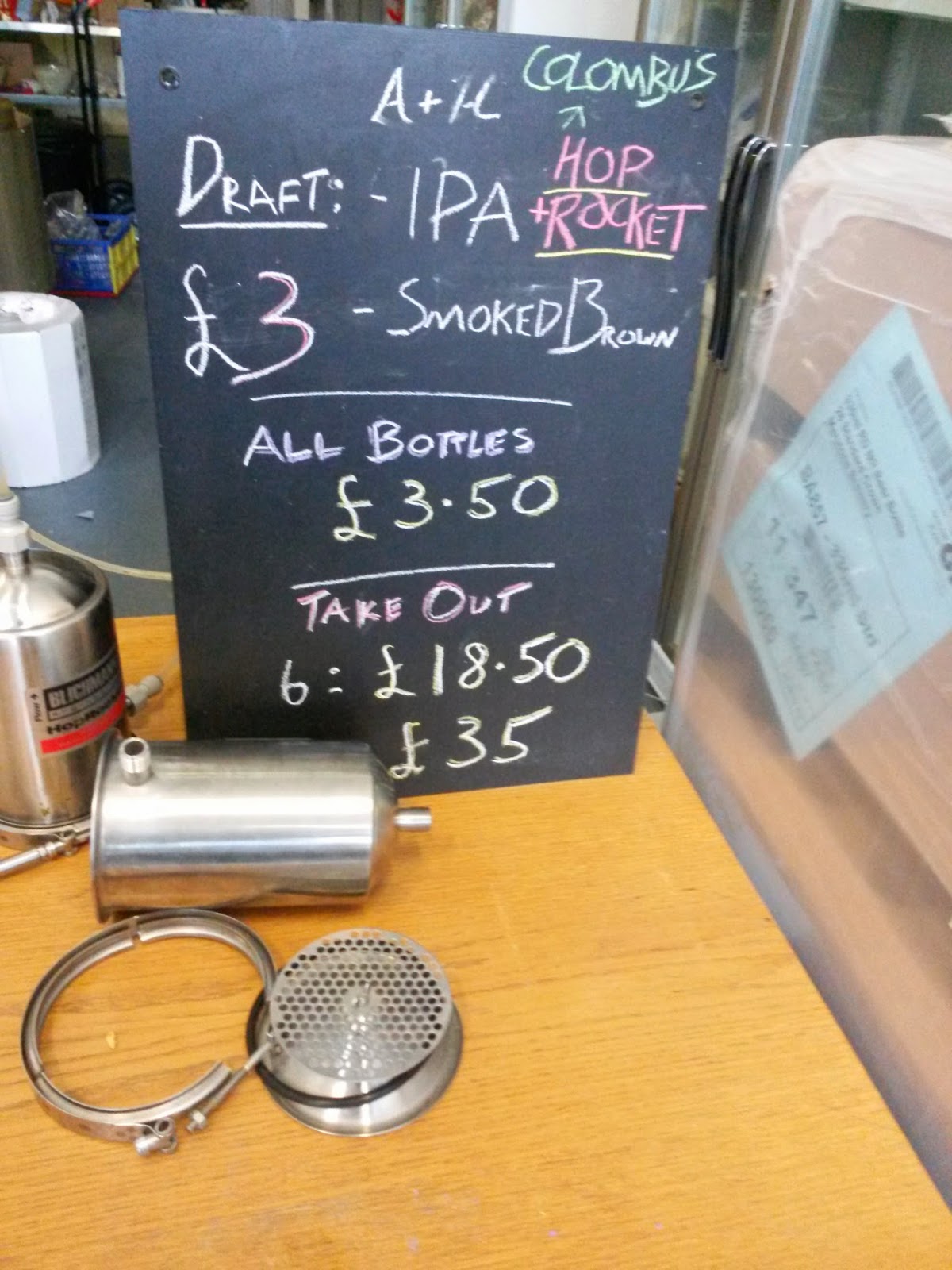 These Randalizers are becoming quite the thing over here but remain somewhat controversial. A hop back or hop rocket is a sealed chambers placed between the brewing kettle and the wort chiller. The idea is that containing the hops allows maximum retention of the volatile hop aromas that would normally disperse. A Randalizer works on the same principle but is placed between the keg and the tap. The beer then passes through the hops just prior to being poured and the alcohol strips the volatile compounds from the hop. But none of the compounds have time to disperse and therefore the beer is reinfused with all of the hoppy goodness. It certainly is interesting having the same beer infused with different hops. While we were there Columbus was replaced by Nelson Sauvin.
As a wind down after the crawl, you can pop back under the bridge and visit the excellent Maltby Street Market. However, if like us, visiting breweries makes you thirsty, a visit to a local hostelry may be in order. I’d recommend the nearby Dean Swift as a safe bet. Walk along Druid St until virtually the end and then follow the path through the housing estate onto Tooley St and then Lafone St. Walk down here until you see the Dean Swift facing you on the corner of Gainsford St. Here you can expect an interesting selection of craft beer and, perhaps, some well needed food.


The Bermondsey Beer Mile works either as a good crawl on its own or as a gateway to London’s other beery delights. The choice is yours.
Anspach & Hobday Brew By Numbers Bullfinch Dean Swift Fourpure Kernel London Breweries Partizan

englishbeerman said…
There is now a new brewery on the mile - Southwark Brewing Company - selling their craft cask ales from handpull, and at a decent price! (And in pints if you want them!!)
25 January 2015 at 19:09