December 15, 2015
Well there has been only one question on the lips of Manchester beery folk of recent: when will Café Beermoth open? Yes, ever since it was announced that N/4 favourite Beermoth was getting a bigger sibling, anticipation and expectation has been quite the mood amongst the hipsters and shakers of Cottonopolis. Whilst the announcement took some by surprise, it was the natural step after Beermoth quickly outgrew its original remit. And co-owners Scott, Jeremy and Simon did well in securing an empty site in Spring Gardens. Whilst the area is not synonymous with beer, it was for many years the centre of banking in the north-west; it does remain an important thoroughfare. 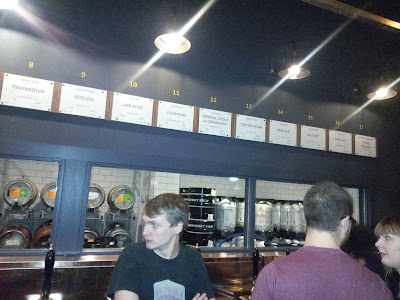 It’s a good location as it links the likes of the Waterhouse and City Arms with the centre of the city whilst remaining a destination in its own right. Opening night was a real celeb fest. I haven’t seen so many of the crafteratti out and about since the (false) rumour about KFC giving away chicken wing buckets. As promised it’s quietly stylish with one long bar and lots and lots of wood with a small space upstairs. It’s comfortable and I immediately felt at home. Well it is a bar after all. A little tweaking is still taking place. Food in the form of sandwiches and, hooray, cheese platters is promised and it is open from 8am to serve the needs of the coffee hungry. 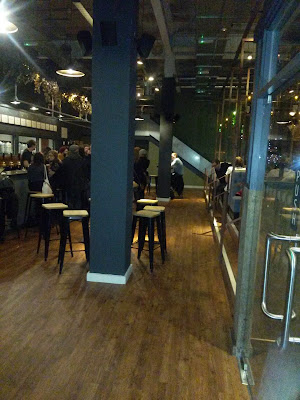 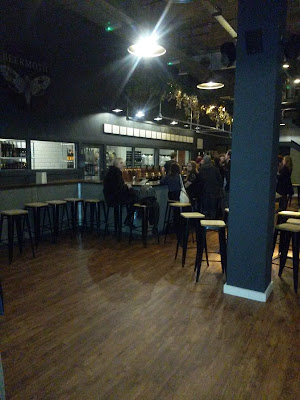 Oh and what about the beer? There are seven cask lines and ten keg offerings with details displayed above the bar. They also seem to have an inordinate amount of wild and saison bottles. Saturday, like my photos, is slightly hazy as I was ten pints in before arriving. However, I do recall enjoying the reassuringly bitter Mallinsons Hop Tzarina along with some London murky Kernel Nelson Sauvin IPA. And there may have been an Odell IPA in there as well. Prices seemed very reasonable for the Manchester scene; although let’s face it I was past caring by then. It seems almost pointless to wish them well as it seems rather self-evident that they will do so. Manchester has a great beer scene and Café Beermoth is a great addition to that scene.

I can't keep up with all the new openings, so your posts really appreciated. You're right about location - fills a gap, and about cheese platters.
15 December 2015 at 20:40

Sue said…
Tand, you didn't need an invite, it was soft opening on Saturday. Even we were there in the afternnon; hadn't known it was already open but we were so informed by Otto the Bierdude and his East Lancs gang who we happened to bump into at the Track/Squawk tap event.
16 December 2015 at 09:12

Sean said…
Personally I'm very disappointed that they have chosen to major on keg instead of cask. Only a few years ago any new opening would be keen to show off their range of real ale. With more breweries than ever and most of them producing cask it seems like a bit of a wasted opportunity. Or are we just going to see the same old names cropping up?
16 December 2015 at 11:22