July 26, 2018
Was it only three years ago that Manchester was gripped by Cloudwater inaugural fever? It seems a lot longer. Ah I remember it well. How innocent we all were. How young we all were. How thirsty we all were. But in the words of that great prophet Robert Zimmerman: "the times they are a-changin'. Indeed they are. Cloudwater-to no one's great surprise-are now firmly established in the top rank of UK craft brewing with a reputation that encompasses Trumpland. 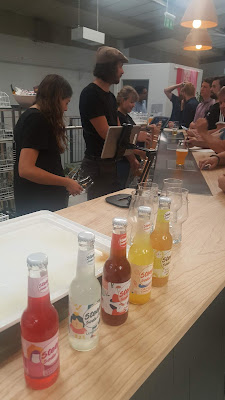 But where can you regularly drink this delightful Manchester nectar? Until recently the answer would have been their Barrel Store underneath the Piccadilly arches. While some may have enthused about its cosiness, truth be told, it wasn't the best showcase for Cloudwater's beers. A brewery with the standing and ambition that they have needed a more suitable outlet. Something, say, like a proper brewery tap. 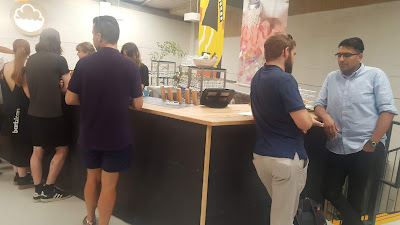 And so it came to pass. The brewery tap is located, logically enough, next to the brewery at unit 9 of the Piccadilly Trading Estate. Downstairs is taken up with merchandise and take out drinking options. The bar is actually upstairs but their is a lift for disabled access. It's smaller than I imagined, it was full with about 80 seated I'd say, but it's clean, bright and a definite improvement on the Barrel Store. 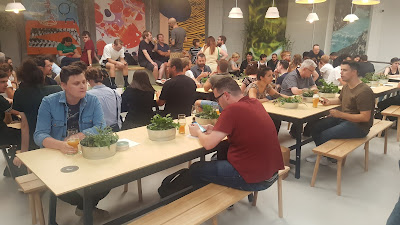 A quick word on the toilets as they were a topic of conversation last night. The first thing to say is that they are very smart. The second thing to note is that they are slightly unusual. The trend is for the single unisex model. These are unisex and have cubicles (including a disabled one) but also have two (partitioned naturally) urinals. This is more like the American model and a sensible move in my view. 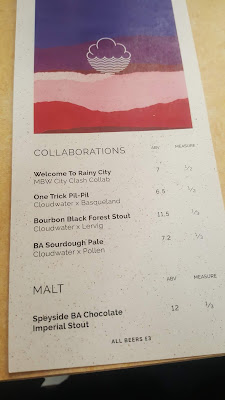 Now onto the really important part; the beer. There are twenty lines on here and frankly it's a bit of a fan boy's wet dream. There are barrel aged beers, collaborations etc etc. Again using the American model, they highlight the latest batches which helps with the message of fresh, local beer. Everything is priced at £3, card payments only and I certainly enjoyed all that passed my lips. 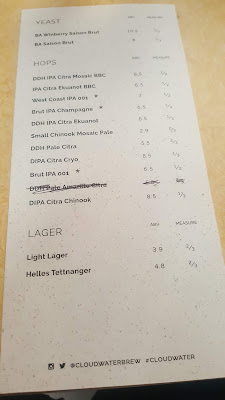 So all good then? Well my only criticism would be that perhaps it was a bit TOO much "craft". Out of twenty beers, only three were under 5%. Yes, yes, I know craft beers are meant to be looked at, admired, sniffed and then-only if aboslutely necessary-gently sipped. But spare a thought for the drinking man, won't you? Apart from that little quibble, it was a very enjoyable evening and you don't have to be Mystic Meg to predict a very successful future for this place.

Billy Whizz said…
The 2/3 measure is a real nuisance. If you're drinking the Mosaic or anything a little weaker, you're constantly going to the bar. I know craft beer doesn't recognise pint glasses but they should use some common sense.
2 August 2018 at 17:34

Simon Aston said…
I've been now and it is good but the pricing is silly. A lot of places have a minimum spend on card payments and they must be taking a hit on £3 orders. But since they are only taking cards and not having to mess about with change, they may as well have flexible pricing.
3 August 2018 at 14:56