July 01, 2018
It's Friday. You've got that Friday feeling. The sun, as always, is shining down on the great metropolis of Mancunia. Time for an afternoon aperitif or two. So it was that the clarion call for drinking compadres went out. And was duly answered. Now I'm not one to gossip but one thing I have observed is that some of those CAMRA members do like a bit of the old imbibing. And who am I to disappoint them?

Being proudly au fait with the Manchester drinking scene, you can forget that some poor devils are not quite as up to date as they should be. Having heard of, but never having been to, GRUB; the first stop was obvious. A now almost iconic Manchester street food outfit, they have come out of their winter hideaway (it can be cold and wet in Manchester, sometimes) and are now back outside at the Mayfield on Baring St. 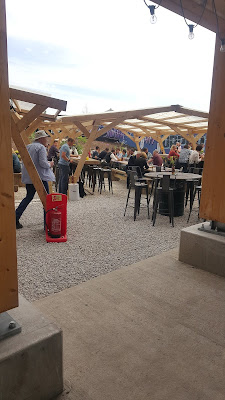 If you can, go to one of their plant powered Sunday events as they are tremendous. However, if you can't make that, the Friday/Saturday events aren't too shabby. Having witnessed the disappointment of their somewhat chaotic early days, it's great to see how much they've come on. The seating's better, the food's better and, most importantly, the beer choice is better.

There's now 4 cask lines and 12 of the funny stuff. The house beer Squawk Pale is always a reliable opener but Neptune Big Sur also got a try out. Next up was an old favourite; the Cloudwater Barrel Store. Pleasantly less busy in the early afternoon, there were no problems in getting served or finding a seat. Now whatever you may think of the early days hype or their controversial (misguided?) abandonment of cask, it can't be denied that their beers have an admirable consistency. 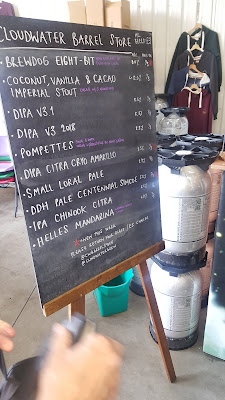 Sure enough, the Chinook,Citra IPA and Centennial, Simcoe Pale were both very good. As was the Helles Mandarina, but the real star was the 2.9% Loral Pale which punched well above its weight. It was deliciously sessionable. Who says you always need a DIPA to deliver the goods? Oh and for those naughty people still taking their glasses: don't. As the sign says: take it back. 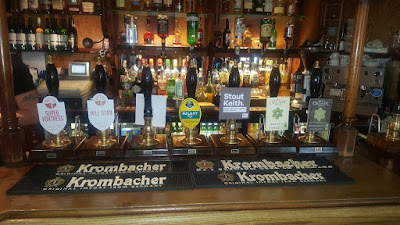 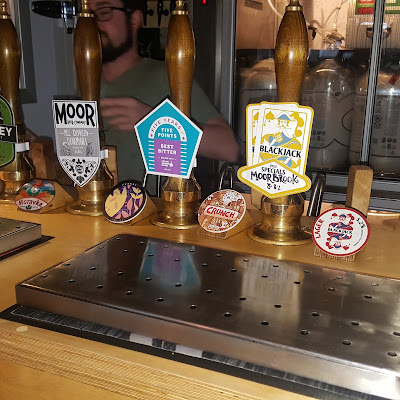 Sadly, things went a little awry at the Angel. Choosing Saltaire Galaxy as a safe bet; had it before, qulaity brewery etc., we were shocked to encounter a diacetyl bomb. Ah such is the fickle nature of enjoying real ale. No one said it was going to be easy. Luckily there was a marked improvement in the Mackie Mayor which always seems to have a good selection on. Nice to see a rare sighting of Five Points on cask and then there was the peanut butter Stout. However, as often is the case, it was Ilkley that came out on top. 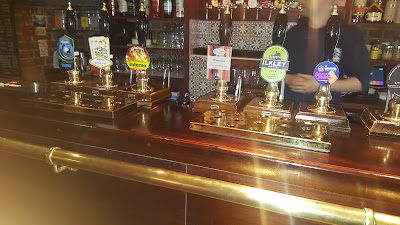 Rearrange these words: jackpot, Smithfield. Yes we hit the mother lode here with Oakham Inferno. Sadly, seemingly all too easily overlooked when festooning local bar tops. That was a definite hit. Unlike the hit amd miss Common which on this occasion was a miss. Another place that could do better is the Abel Heywood. This place is popular with the suited and booted and those that think it's a "hidden gem". Unfortunately it's usually undewhelming on the beer front. And so it was with the cheekily mislabelled Kansas (actually Hydes) Brewing Pond Hopper. 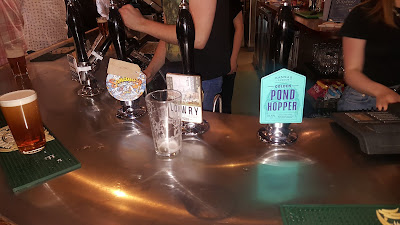 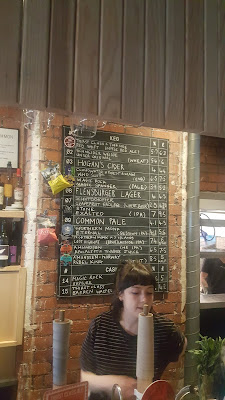 57 Thomas St is the younger, trendy sibling of that famous Manchester institution, the Marble Arch. It certainly looks the part-small main bar, unisex loo, etc. And just like any other decent stop on the N/4 circuit, it offers a large number (10) of beers. And being part of the Marble brewing empire, you would imagine that it would showcase their finest product. After all, outside of the Arch, cask Marble is a rarity. But they seem surprisngly coy in that department. And, once again, there was none to be had. You don't have to be an expert in Scapulimancy to read between the lines here. Anyway, the Anarchy Blonde was a more than decent alternative. 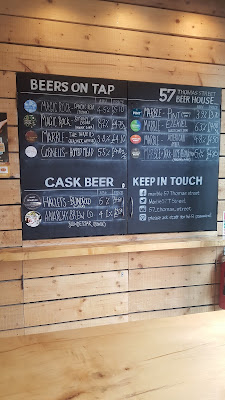 Time and trains wait for no man. So with the sun going down and our bladder levels going up, there was just time for one last stop for us all. The Pilcrow is handily placed for Victoria Station and is much more of a safe bet than Common. An interesting 2.9% Red Willow Faithless, a crisp Effortless and a decent Beatnikz Republic made for a terrific final trio.
Manchester

Phil said…
Did you go upstairs in 57 Thomas St? They hide the cask beers up there these days - a weird reversal of their original policy of making a design feature of the casks, practically sitting them on the bar.
1 July 2018 at 23:25

Tyson said…
Yes we did. There were two cask beers on but, as usual, they weren't Marble beers. They just don't seem interested in showcasing their own beer. Which I think says a lot.
17 July 2018 at 18:52