When I was a wee pup: back in ye olden days of Middle-earth, when Gandalf was just starting out, I learnt of the Tuesday Night Test. These were the days of pubs on every street corner (or so it seemed) and pubs selling gallons of Mild etc. Quality though, as ever, was an issue. And although you got to know where the best pints were to be had, the real test was what was the beer like on a Tuesday night? Any pub that could deliver on what was traditionally the quietest day was probably going to be a safe bet anytime.

Fast forward to the internet age and whilst quality may still be an issue, despite the falling number of outlets, what you can't fault is the choice. Or so the theory goes. A Tuesday afternoon stroll round Manchester therefore should be a piece of the proverbial cake. No problem at the first stop, the Pilcrow, where both the Ridgeway Plato and Ilkley Fake News proved crips and refreshing. 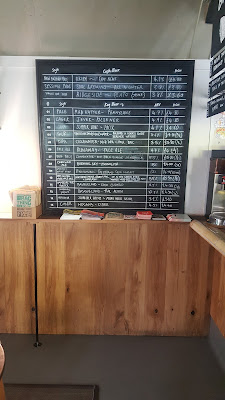 Now where to next? It would be all too easy to fall into the standard N/4 pattern. But hardened adventurers that we are, it was decided to plunge into the depths of Deansgate and work our way up. Taking advantage of the excellent free Metroshuttle bus service, we soon found ourselves outside the Knott Bar. An old classic. You can't go wrong here. Only one problem; it was, despite advertising to the contrary, closed. Inquiries on social media went unanswered but I have been told that their weekday hours can vary. So drinkers beware. 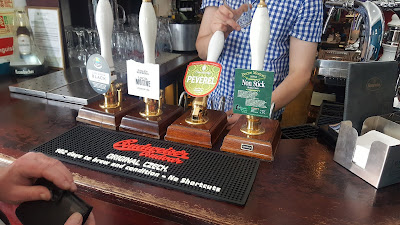 Much better tidings at Cask on Liverpool Road. Well it was open for a start. Now I don't get to this place as often as I used to, or should really. Which is a shame as it's usually very dependable. Today was no exception with friendly service and a good choice of beers. And, despite the place being empty, the beer was in good condition. The Thornbridge Peverel went down easy which consequently led to the old drinker's dilema: whether to play safe and stay or to keep on the road? 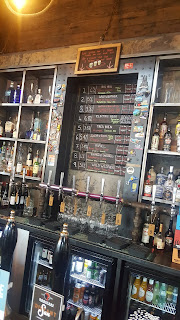 Being the hardy adventurous types, we moved on. A brisk stroll took us to the Dockyard at Spinningfields. It has to be said that this minimalist barn of a bar lacks character and I've often been disappointed by the beer as well. However, it is on the way to Bridge St and one must expect peaks and troughs when out quenching the fires of thirst. A lacklustre choice led us to plump for Pomona Island. A locally brewed Pale Ale from the fine city of Salford.

Now the first thing you should be getting from this beer-given its description-is a crisp, citurs hop kick. Sadly, it was unplesantly grainy. Perhaps they had forgotten to treat the water from the River Irwell? Jack looked glum, Jill looked glummer. The Wallsend Wonder wouldn't touch it. Time to move on. But where to? Too early for the Brink and the Gas Lamp wasn't open either. A sad reflection on the afternoon drinking habits of the local worker bees. 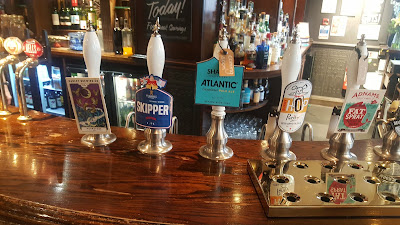 To kill some time, we headed for the Sawyers Arms on the corner of Deansgate. Being a Nicholson's pub, it is, despite the lack of clientele, required to open all day. Despite what their website says, it's not Manchester's oldeat pub, nor does it serve "an eclectic range of real ales". The choice was actually pretty appalling. One beer was definitely off and the replacement, although also suspect, was endured through gritted teeth as a necessary evil. 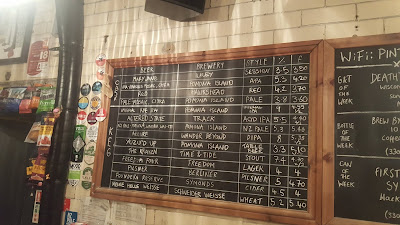 Never mind, the Gas Lamp was open by now and, having the place to ourselves, we quickly settled in the back room. Groans had met the realisation that the curse of local ale had struck again. That's when a brewery carpet bombs one area leaving you to see the same beers repeatedly. Not necessarilly a bad thing, some might say.  But when it's Pomona Island: it is. Luckily we had Ilkley Mary Jane to fall back on which, despite being a little tired, gave us some respite. 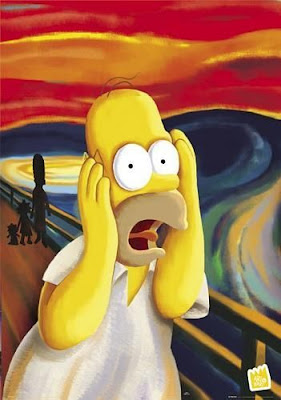 Hoping for better things and with expectations high, it was time to cross the road to the Brink. No bankers here, either, unfortunately:  Peaches Sour 6.2%,  Coffee Red Ale 5.7%,  Lime & Chilli Wit 5%. And, yes you guessed it, Pomona Island. That left just two pales-from Thirst Class and Torrside-which were both only so-so. Mutiny was in the air and only cans of the craft stuff could fill the aching chasm. 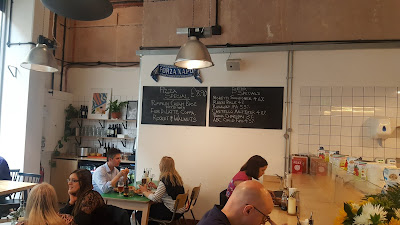 Despondency and lethargy had begun to take hold now and the only remedy was pizza. The new Rudy's on Peter St beckoned and with the aid of excellent pizza and wine, harmony was finally restored.

*On today's evidence, it certainly is in Manchester.

Dave W said…
Manchester pubs can be surprisingly quiet these days. I've noticed a gradual decline over the last 5 years. Daytime drinking is now practically non-existant outside of a few dining venues.
18 July 2018 at 17:02

Mark Haynes said…
I've been disappointed on a few visits to the city centre. Some places repeatedly let you down. And local ale only adds to the problem.
20 July 2018 at 16:55