The never ending tour of Manchester continues. With a lot of places either still closed completely or not opening early in the week, it's easier to do a direct comparison at weekends. So a week after my first visit, it was nose back to the grindstone as I hit the dusty trail once more. This Friday my colleagues in beer were to be the Whitefield Holts Bandit (remember him) and Lidl Paul. Fine upstanding gentlefolk. Or so they tell me.

The first port of call was to be the Pilcrow. But finding ourselves arriving before opening time, it was decided to have an aperitif in the Crown & Anchor. This upmarket city centre Holts pub is ideally located for mopping up the shopping and city workers trade. Normally at this time it would already be buzzing but it was eerily quiet inside. A lot of staff are home working/still furloughed and the tram hadn't been packed with its usual throng of shoppers. However, there was something of a crowd spread outside enjoying the intermittent sun. The IPA was in good form here but the pub has to be marked down for not having any track and trace procedure in operation. 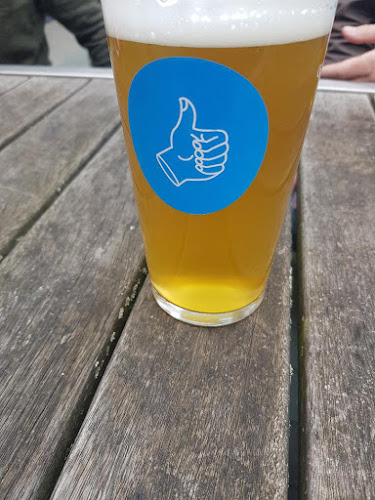 Onwards and upwards to the Pilcrow. We went al fresco here which, in Manchester, is just asking for it to rain. So of course, it rained. Now the wheels began to come off the wagon early on here. I had planned a leisurely one-pint-stop crawl. But with two rascals like the WHB & LP for company, that was always going to go awry. I was like a lamb to the slaughter. We had both Track Sonoma and Beatnikz Tropic Fiesta here. But while their Covid-19 measures were excellent, sadly we found both pints to be under par. 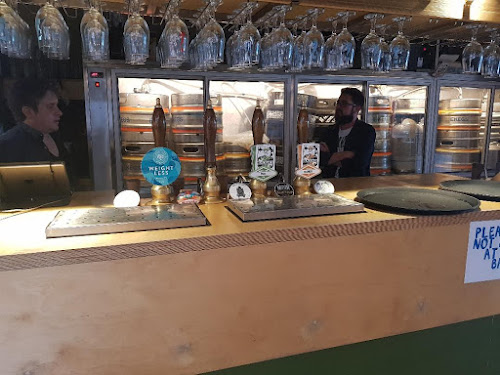 Next up was the newly reopened Jack in the Box (Blackjack bar) in the Mackie Mayor. First black mark against it was the insistence on ordering by app only. Not only unnecessary and unhelpful when the bar is very quiet but also inherently a discriminatory practice. The app was duly downloaded and is a bit fiddly: you have to keep going back to add items, but we persevered. Why didn't we just leave as we saw some others do? Well we could see the excellent Redwillow Weightless on the bar and that was our incentive. Only problem was when we did fire up the app, it wasn't on the menu. Apologies from the staff and eventually we did get our beer. And delish it was too. Bursting with Mosaic flavour, it soothed our frayed nerves. 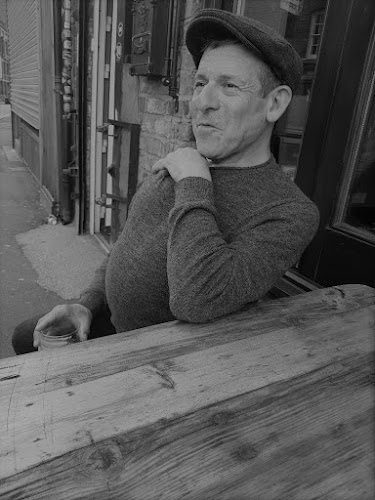 No such problems at Port St. You can order via app or at the table here. A quick word about their app. It covers all the company's outlets-Port St, Common, Beagle and the Pilcrow. Of the many I've tried, it's by far the best and the only one of any use in ordering draught beer. It's got a full description of cask and keg and is easy to use. The big boys such as Spoons and Greene King are way behind. Combine its ease of use with a winning combination of beers from the likes of Track and Ilkley and Port St proved near impossible to escape from. Well I did mention who I was out with, didn't I? 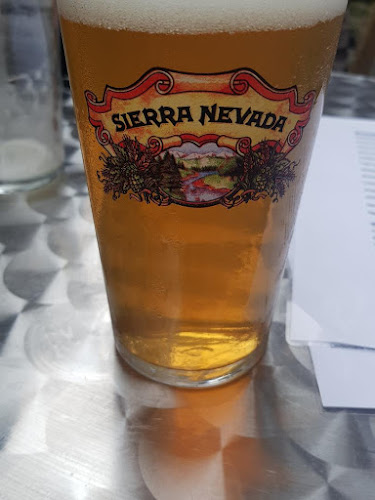 Eventually though Paul and I did manage to extricate ourselves from the delights of Port St and headed over to Cask in Ancoats. Once again this was a busy venue but we managed to get a seat outside before moving inside when the clock struck the “no glasses outside” hour. Here we sampled some delightful beverages before realising that we were too late for Bundobust. These early weekend finishes in Manchester will take some getting use to. LP did insist we call in at the Trackside on the way home but as we had to sit outside with flimsy plastic glasses, the less said about that, the better.

Time travel is a wonderful thing. We will now transport ourselves eight days hence and find ourselves in Manchester once more. This time was different though. The tram was busier, the city was busier. People were sat outside seemingly everywhere. 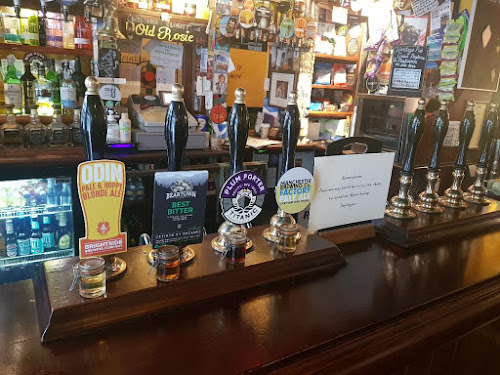 Finding Cafe Beermoth full and booked for the evening, we took a diversion to the City Arms on Kennedy St. This small, unassuming, boozer has had its ups and downs over the years, but usually maintains a decent selection of real ales. On this occasion we landed lucky as Manchester Brewing Factory Pale Ale was on. This is an excellent Citra based 4% session ale. Now there was no attempt at track and trace here but it was quiet and with the beer so good, we decided to have another. That proved to be a mistake. No sooner had we retreated to the back room before a crowd arrived. And arrived. And arrived. The place was absolutely full. No attempt at social distancing and no attempt to meet government guidelines. One to cross off the list. 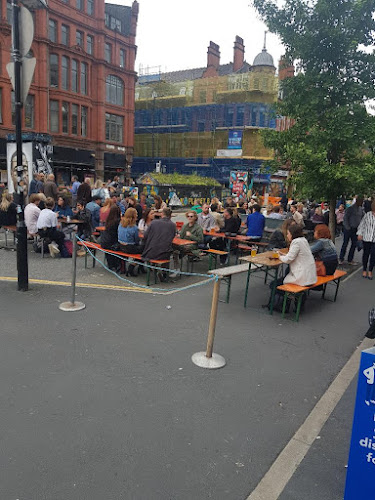 Making our way slowly to Cask on Union St, it was evident that for many places it was business as usual. Bouncers had reappeared on doors and where people couldn't get in, they were sat sprawling outside. We poked our head in a busy Flok on Stevenson Sq and were invited to squeeze into the middle of a large group. We politely declined. Luckily it is possible to get a good pint in Manchester and not worry about someone coughing in your face. 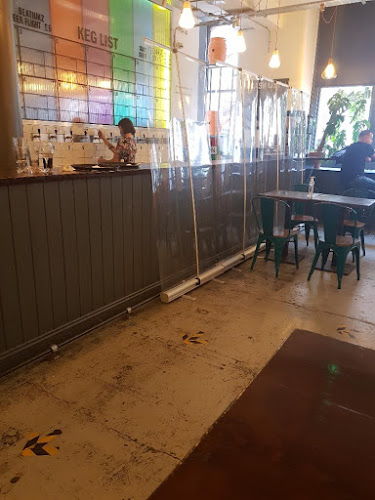 So thus we found ourselves once more in the comforting surroundings of Beatnikz Republic. And once more enjoying the delights of Tropic Fiesta. A little walk then took us to Cask which, not unexpectedly, was busy. However Warren and the crew here manage things really well and it wasn't long before we were tucking into a real treat: a Cloudwater special on cask. We could easily have had more than a couple here but we wanted to move further into the NQ, so off to Port St we went. 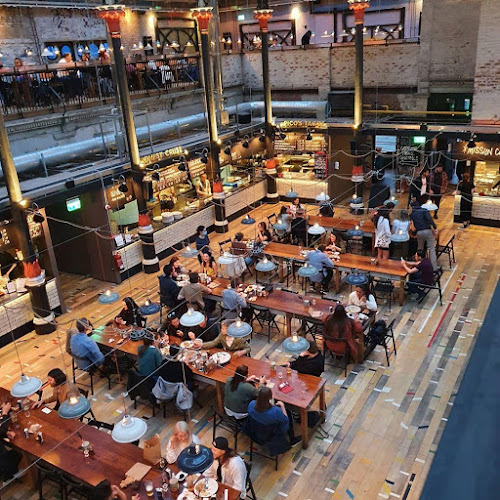 For the first time there was queueing here but you're always guaranteed a good selection, so it's worth the short wait. They've also erected an impressive giant umbrella in the backyard which proved a lifesaver from the Manchester rain. Time was pressing on and as we knew that the Mackie Mayor still had Redwillow Weightless on, despite some misgivings, we headed there. Another great pint in there and then it was make or break time. It was risk moving and being caught out by the 10pm cut off that many pubs were enforcing or stay put. Well you know what they say: a pint in the hand etc. So settle in we did. A fine end to another day of excellent beer.

There definitely seems to be a correlation between where you can guarantee the quality of beer and where you can feel safe. Worth bearing in mind when spending those precious pennies.

Lee said…
Disappointing to see somewhere like the City Arms behave so irresponsibly. Not been out much but everywhere I have been has been great. Sadly it looks as if not everyone is playing by the rules.
30 July 2020 at 16:26